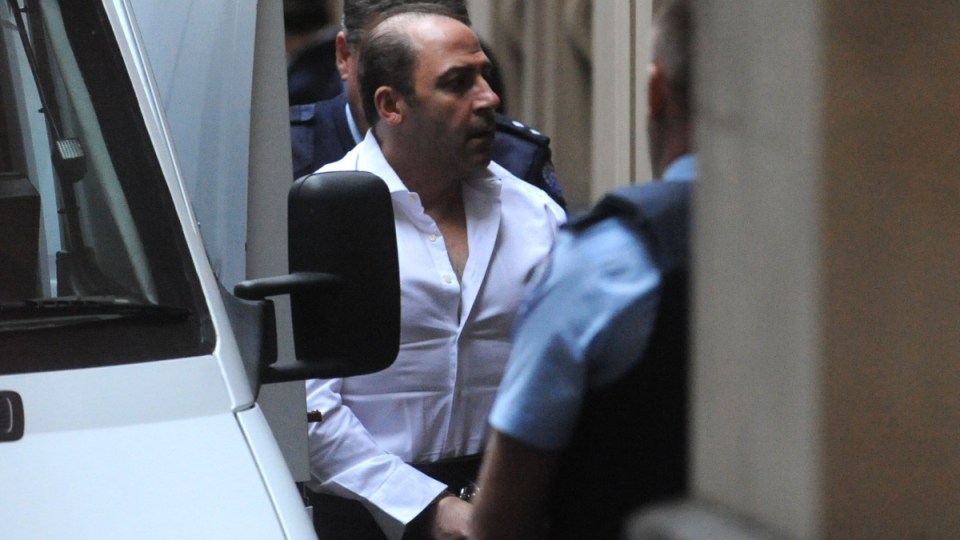 Tony Mokbel is pictured in 2012 after being jailed for 30 years for drug trafficking. Photo: AAP

Victorian Premier Daniel Andrews has announced a royal commission into the use by police of a criminal defence lawyer as an informant during Melbourne’s bloody gangland war.

The lawyer represented notorious underworld figure Tony Mokbel and six of his associates, while acting as a paid police informant against some of her clients.

The announcement of a royal commission followed the lifting of suppression orders Monday morning on a case decided in the High Court last month involving Victoria Police, the lawyer-turned-informant and the Victorian Director of Public Prosecutions (DPP).

Court documents revealed the lawyer claimed to have helped police in as many as 386 cases, including that of Mokbel, who in 2012 was sentenced to 30 years’ jail for masterminding a sophisticated drug cartel known as The Company.

She also provided information on the importation in 2007 of 4.4 tonnes of ecstasy inside tomato tins shipped from Italy. Mokbel associate Rob Karam is serving a sentence of more than 35 years’ jail for his part in the case.

The revelations open up the prospect of criminals having their convictions overturned and walking free from prison, and potentially expose the state to claims for compensation from those affected by the lawyer’s work as an informant.

The High Court judgement said by acting as an informant against her clients, the lawyer committed “fundamental and appalling breaches” of her obligations.

The High Court condemned Victorian police, saying they were guilty of “reprehensible conduct” in encouraging the barrister to give up information about the accused and were involved in sanctioning “atrocious breaches of the sworn duty of every police officer”.

“As a result, the prosecution of each convicted person was corrupted in a manner which debased fundamental premises of the criminal justice system,” the court said.

Mr Andrews said Victoria Police had given the government assurances that its practices had changed since the barrister was recruited as an informant, and that a 2015 report by the Independent Broad-based Anti-corruption Commission (IBAC) had found that no unlawful conduct had occurred.

But he said the Victorian community had a right to know what had happened in the case, and to be assured that such practices had been stamped out.

“Given there’s a prospect of some very well-known individuals walking free, we think it’s appropriate to have this highest and most formal type of inquiry … to give us the answers we need and the certainty that this could never happen again,” Mr Andrews said.

Mr Andrews said the safety of the lawyer and potentially her children were at risk.

Victoria’s Director of Public Prosecutions, Kerri Judd QC, has written to 20 criminals whose convictions may have been affected by the force’s use of the barrister as an informant.

“Other cases are being assessed. If appropriate, I will also write to those affected individuals,” Ms Judd said in a brief statement.

Victoria Police Chief Commissioner Graham Ashton acknowledged that the High Court had determined that police’s use of the lawyer as an informant between 2005 and 2009 was not appropriate and said it had set up a taskforce to deal with any legal implications flowing from the case.

He said since 2009 the force had made changes to the way it managed informants, which would prevent the same thing happening today.

Chief Commissioner Ashton said he believed two Commonwealth cases could be affected, in addition to the 20 cases identified by the Office of Public Prosecutions.

“Melbourne was in the grip of what is now rightly known as the gangland wars,” he said.

“Over the preceding 12 months numerous people had been murdered, some in very public locations, and high-profile criminals were vying for control of drug operations that were inflicting serious harm on the Victorian community.

“The risk to the community at this time was significant.”

Chief Commissioner Ashton said that he believed the current and retired officers who managed the informant had acted “in good faith”, adding “they can expect to have my continuing support”.

He defended police’s legal efforts to suppress the arrangement, adding that police remained concerned for the safety of the lawyer.

“At all times when handling these matters our absolute concern has been for the protection of the lawyer and their family, who Victoria Police believed would be murdered if this information was released,” he said.

“Nothing is more important to Victoria Police than the protection of human life.”

“I worked as a criminal lawyer for 55 years. The first rule was everything your client tells you is totally confidential and you take it to the grave.

“To have a paid police informer who was a lawyer conveying a client’s information to the police is the biggest breach you could imagine of that principle.”

Former Victoria Police assistant commissioner Noel Ashby said the impact of the revelations would be felt for years to come.

“This will be raised before juries into the future,” he said.

Earlier, Mr Andrews was flanked by Police Minister Lisa Neville and his new Attorney-General Jill Hennessy as he announced the royal commission.

He said the royal commission will first determine how many cases were impacted by the use of the barrister as an informant.

It will also consider what changes may need to be made to the management of informants by police.

The royal commission will also make recommendations on how to deal with those whose criminal cases may have been affected by the use of the barrister as an informant, including the status of their convictions and any claims for compensation.