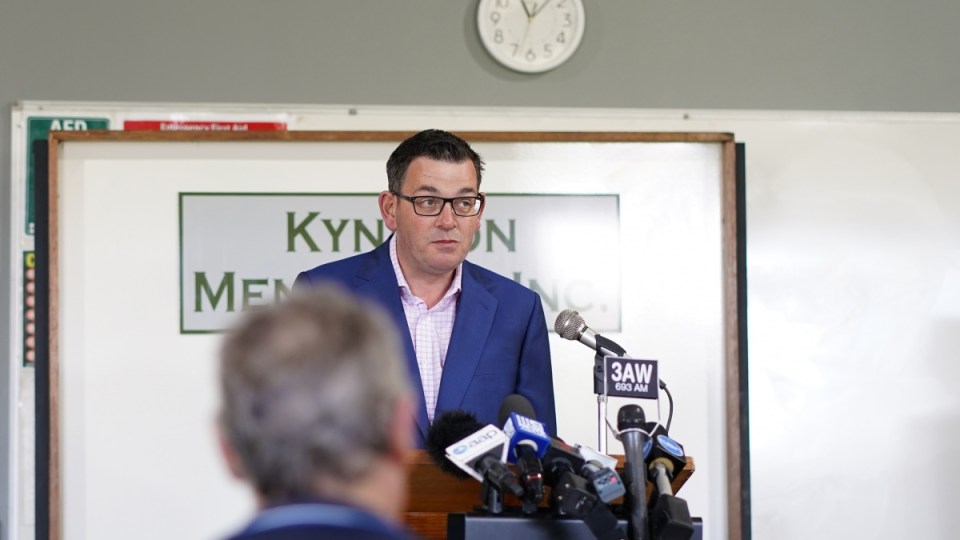 Daniel Andrews was at a Men’s Shed when he announced Labor’s royal commission into mental health plans. Photo: AAP

Victorian Premier Daniel Andrews has promised to hold a royal commission into mental health if his government is re-elected next month.

Mr Andrews made the pledge at the Men’s Shed in Kyneton, north-west of Melbourne, saying a royal commission would bring mental health out of the darkness and into the “blinding light”.

He said the inquiry would change lives and save lives.

“We don’t have the best mental health system we can possibly have,” he said.

“Only when a person is in real crisis do they get tailored individual help.

“We have a system that simply can’t cope and will continue to contribute to tragedy if we don’t have a royal commission and seek those answers, make that reform, drive that change and show that leadership,” he said.

Mr Andrews said the issue had hit home for him when both of his children had returned from school with letters about the death of a student.

“When Cath showed me the note that had come home from school … that’s pretty tough,” he said.

“You think it’s a set of issues that happen in other families, at other schools.

“So when it comes home to you like that, that’s a real wake-up [call].”

Mr Andrews was joined at the announcement by Bob Grubb, who lost his grandson to suicide in 2001.

“I didn’t realise that fellas have got so many tears inside of them, but I can cry now and gallons come out because of the loss.”

More than 3,000 Australians take their own life every year. Imagine what we'd do if 3,000 people were getting gunned down on the street in this country? The gears of the nation's entire political system would be straining, trying to solve it.

Mr Grubb said joining the Men’s Shed gave him the support he needed to get through his grandson’s death.

Commissioners would be appointed within 100 days

Mr Andrews said the federal government would need to be part of the process, and rejected the suggestion that mental health funding or programs would be left in limbo while the royal commission took place.

Mental Health Minister Martin Foley said half of all Victorians would experience a mental illness at some point in their lives.

He said more than 170,000 Victorians had accessed mental health services in the past 12 months.

“Despite the fact that we’ve increased funding in just about every measure of the system, the truth of the matter is that our mental health system is straining at the edges,” he said.

In a statement announcing the royal commission, Mr Andrews said 621 Victorians died from suicide last year, and this year one in five Victorians would experience a mental illness.

Mr Andrews said if Labor was re-elected, work on the royal commission would start within the government’s first 100 days, including the appointment of commissioners and the announcement of terms of reference.

He estimated the royal commission would cost $13.2 million, which would be comparable to the cost of the Royal Commission into Family Violence.

He said he hoped the royal commission would report back within two years, and promised to implement all its recommendations.

Mental health expert Professor Patrick McGorry welcomed the election promise, and called on the Victorian Coalition to support it.

“The people of Victoria have been waiting for a decisive time of action for many years,” the former Australian of the Year said.

“In the spirit of bipartisanship – and mental health has traditionally been a bipartisan issue – we would respectfully urge the opposition to seriously consider supporting this move,” he said.

“We dismantled a 19th century model 20 years ago and we built something that was flawed, under-invested and has just fallen apart actually,” he said.

“So we have to start again, we have to listen to the people who use the service … and design something that’s really going to help them make a recovery, to respond to desperate situations and suicidal crises in a much more humane and effective way than currently.”

The Australian Medical Association also called on the opposition to match the government’s commitment.

“There has been a lack of investment into the mental health system over the past decade,” said the association’s Victorian president, Associate Professor Julian Rait.

“A serious and considered review of the mental health system is long overdue.”

The Victorian Council of Social Service (VCOSS) hailed the promise as “a landmark step that will save lives”.

“Our graveyards are full of people who the mental health system failed.

“Our prisons are full of people who needed mental health support but didn’t get it.

“We need to be helping people early – including in community settings such as GP clinics, mothers’ groups, Neighbourhood Houses and Men’s Sheds – before problems spiral out of control.”

Mental Health Victoria’s chief executive Angus Clelland said mental health had been the poor cousin of the health system, leaving pressure points in the system that needed to be addressed.

“Having a royal commission will look at the entire system and lock the future government into funding and investment to improve the system for everyone,” he said.

In a statement, the Victorian opposition did not indicate whether it would support the royal commission.

“Since Daniel Andrews has been premier, Victoria’s population has increased by around 500,000 people and at the same time he has cut community mental health funding by 17 per cent,” Ms Kealy said.

“If Daniel Andrews is serious about doing more for mental health, he will start by reversing his cuts and finding more funding to match the population growth that has occurred on his watch.”