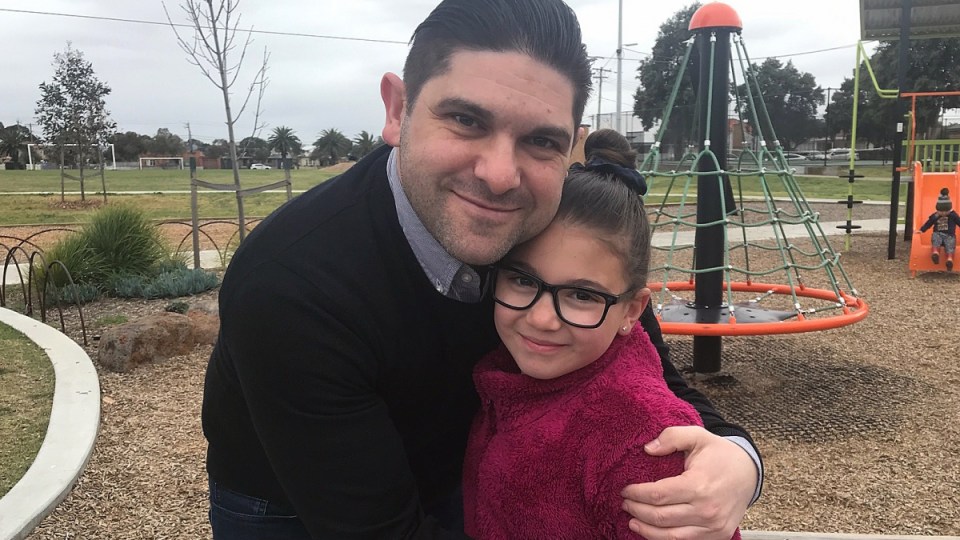 Allegra Siciliano was rushed to hospital in 2013. Photo: AAP

A young Victorian girl who almost died from the flu has urged others to get a potentially life-saving vaccine after last year’s horror season.

It comes as the state government extends free jabs for children for another year, with about 30,000 fewer flu cases this year.

Allegra Siciliano, eight, suffered common cold symptoms for about four days before a bad spell overnight saw her parents rush her to hospital in 2013.

Her father Ross Siciliano told reporters on Sunday that she spent about a week in the intensive care unit, and another month and a half in hospital. Allegra’s recovery is ongoing.

“We were not sure if she would make it. Then through that week … [they] diagnosed the underlying cause and link back to influenza. After that it was intense rehabilitation, uncertainty for months,” he said.

“She basically had to start over. She lost her ability to speak, her fine motor skills.”

Mr Siciliano said his family “religiously” gets the flu vaccine now and wants others to follow.

“You should get the flu injection even though you are not sick because you can still catch it,” Allegra said.

New figures show 1.7 million vulnerable Victorians have taken up the free flu vaccine this year, an increase of 45 per cent, after one of the state’s worst seasons ever.

There have been less than 5000 cases of the flu reported this year, down from 35,346 cases in the same period last year when the season turned fatal.

The number of flu outbreaks in residential aged care facilities has also plunged from 223 to 15.

Health Minister Jill Hennessy told reporters it had been a “really significant improvement” on last year.

“The trend line and the data this year gives us great confidence that we are looking at a pretty optimistic climb down from what is usually the peak of the flu season,” she said.

She put the results down to learning from last year’s flu season, education about the importance of vaccinations and funding.

The state government announced on Sunday it would fund free flu vaccines for babies aged six months to children under five for another year, while it pushes for the jab to be put on the federal National Immunisation Program.

“It is a bit of a game changer bringing immunisation to children between six months and five years because we know many of the most severe cases occur in pregnant women, in older people and younger children,” chief preventive health officer Bruce Bolam said.

“We have delivered more vaccinations than we ever have as a state, and that’s made a really significant difference.”

It is not yet known if anyone has died as a result of the flu this year, Dr Bolam said.