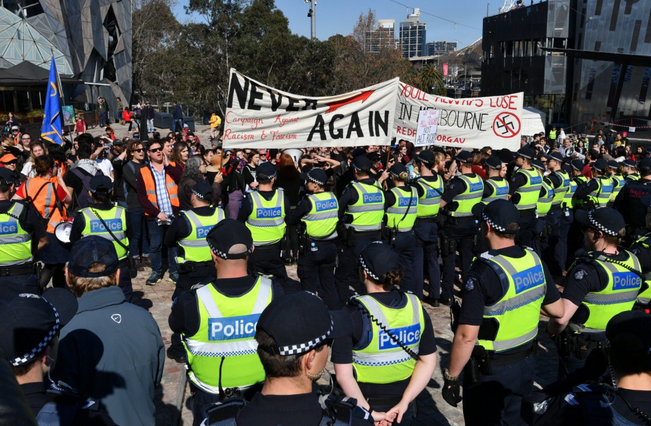 Two men were taken into custody and others escorted from Melbourne’s Federation Square as police struggled to keep apart those attending a men’s rights and counter-protesters.

The rally was organised by social media personality and right-wing activist Sydney Watson, who said she wanted Australians to come together “for masculinity, for men’s rights, and just to demonstrate that we know that men matter too”.

“The purpose of this rally is not to hate on women, diminish women’s rights, or make any negative statements about women,” Ms Watson said in a YouTube video promoting the event.

“This is about men and women standing shoulder to shoulder” to reject what she described as an ongoing “assault on men collectively”.

Scuffles have broken out during a protest march in the city in support of mens' rights. @CameronBaud7 #7News pic.twitter.com/UjYKlxDYgL

Watson’s event pulled a crowd of around 500, but she claimed many more could not get through the police cordon to join the rally.

The counter-protest drew at least several hundred more than that from two left wing groups, The Campaign Against Racism and Fascism and the Women’s Department of the National Union of Students.

Brandishing banners accusing Ms Watson and her supporters of being Nazis, they jostled with several hundred police who had their hands full keeping the opposing groups separated.

Some 270 bag searches were conducted, with one man was charged after being allegedly found with a knife.

Another was escorted from the rally after reportedly jabbing a woman with stick-mounted sign.

The counter-protesters accused Ms Watson and her supporters of promoting misogyny and gendered violence.