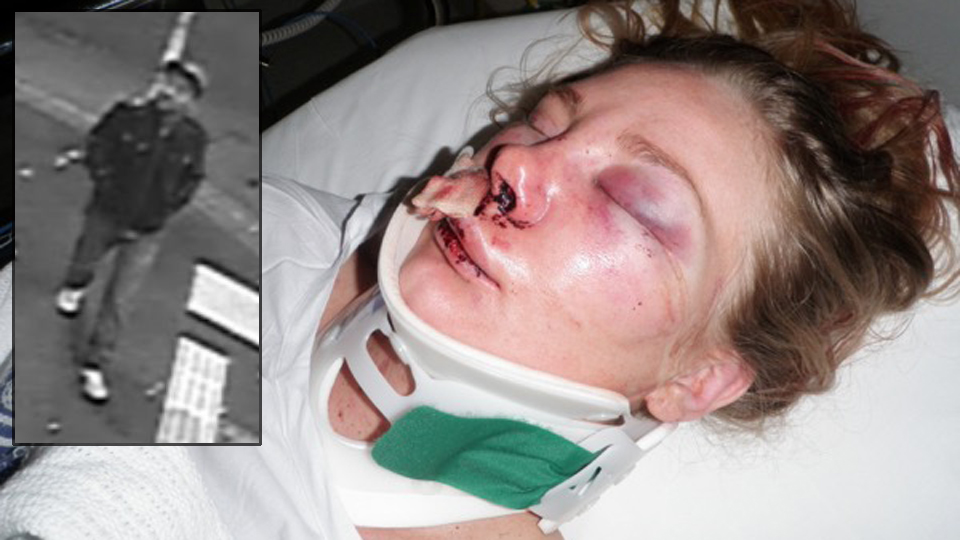 The prime suspect in Chloe's assault is a man, late 20s, of Asian or Indian appearance. Photos: Victoria Police

Melbourne woman Chloe was 22 when she was stalked and brutally sexually assaulted while walking home from her first night out after having a baby just seven weeks earlier.

She has waived her right to anonymity in the hopes her 2013 attacker will be brought to justice.

Crime Stoppers on Sunday released the first re-enactment video in more than a decade, as Victoria Police announced a $500,000 reward for information on the North Melbourne sexual assault.

“‘Brutal’ is not a word I use very often. But I think it is probably the best word to describe this particular attack,” Detective Inspector Steve Wilson told reporters on Sunday.

Police released shocking images of her injuries as well as an emotional interview with Chloe.

Chloe, then 22, was walking home from the Melbourne CBD about 3am on June 30, 2013, when a man approached her on King Street near La Trobe Street.

He asked her where she was going, and said something along the lines of, “Wherever you’re going, I’m going”.

She was then followed down King and Victoria streets and into Chetwynd Street, when the man grabbed her in a bear-hug and dragged her about five metres down Browns Lane.

Chloe’s screams alerted a resident, who then saw the man running south down Chetwynd Street.

Detective Wilson said police were close to making an arrest, and had multiple persons of interest – “one in particular”.

Watch the re-enactment below

Police are looking for four men who may be able to place a suspect at the scene.

Those men may have spoken to Chloe as well as the offender.

Detective Wilson said the “horrendous” and “heinous” incident was on the extreme end of physical and sexual violence.

She spent several days in hospital and has undergone plastic surgery as the result of injuries to her lip.

“At the time of this incident, Chloe was a new mum. She’d had a baby seven weeks earlier and this was her first night out after having a baby.

“So her injuries were very significant.”

Chloe said the scar on her lip was a daily reminder of the attack.

“Every time I look in the mirror there’s a scar on my face, there’s a reminder of what happened,” she said in video released on Sunday.

“It destroyed me for a really long time, I think. I was a new mum, I couldn’t be the mum I wanted to be because I was dealing with this.

“I tried to self-medicate with alcohol. I couldn’t sleep, I had insomnia. As much as it has damaged me, I think it damaged me and my son’s relationship because I was trying to deal with what was happening with me.”

She said she had been out with friends, and regularly walked the same way home.

“[I] had a good night and started walking home, just normal.”

She urged anyone with information to come forward in the hopes of sealing a conviction.

“It would give me justice, but it would help make me feel relieved that this person can’t do this again to anyone else.

“Because that’s one thing that I would never wish on anyone to go through what I’ve gone through, ever. Because no one deserves that. No one. Absolutely no one.

The man is described as being in his late 20s and either Asian or Indian sub-continental in appearance. He is about 5’9″ or 5’10” tall and medium build, with short, black cropped hair.

The man was unshaven with stubble, wearing a black top, blue jeans and an open leather jacket.

Anyone with information about the incident should contact Crime Stoppers on 1800 333 000.