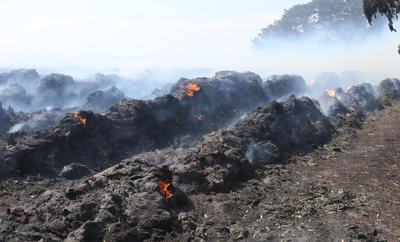 Schools in a southwest Victorian town will be relocated this week amid concerns about poor air quality from smouldering fires.

Emergency services are warning of poor air quality for residents in the Cobrico South area, near Cobden, due to smoke from peat fires.

Peat fires are created in wetlands from partially-decayed vegetation, and produce stinking and irritating gases that particularly affect those with heart or lung conditions.

On Sunday, smoke billowing from peat fires led to the evacuation of 55 aged care residents from Cobden and the opening of relief centres in the town and at nearby Terang.

The peat fire of most concern to authorities is burning near Cobrico and is 58 hectares by seven metres deep.

Schools in Cobden will be temporarily relocated this week as a precaution to ensure students are not interrupted by the poor air quality.

Residents within a kilometre of the plume are also recommended to relocate to stay with family and friends overnight, but can return during the day.

Those living within six kilometres of the plume are also urged to avoid outdoor physical activity.

Once ignited, peat fires are hard to extinguish and their smoke can reduce air quality, particularly within one kilometre of the fire.

“Our recommendation is you stay out of the smoke as much as possible. Carbon monoxide builds up gradually in the human body over a period of hours and will gradually be removed after exposure stops,” he said.

Air quality stations have been set up at Cobden, Camperdown, Terang and Cobrico to monitor conditions.

Free health checks are available at the Terang civic hall, and residents within one kilometre of the plume are encouraged to get their carbon monoxide levels tested regularly.

Where safe, it is recommended livestock be moved away from the plume and veterinary advice sought if animal owners are concerned.

Advice messages remain in place on Monday for bushfires at Penshurst, Terang and Cobden that have been burning more than a week that have claimed 26 houses, more than 60 sheds and thousands of livestock.

A severe weather warning forecast for damaging winds in the southwest district was cancelled on Monday.