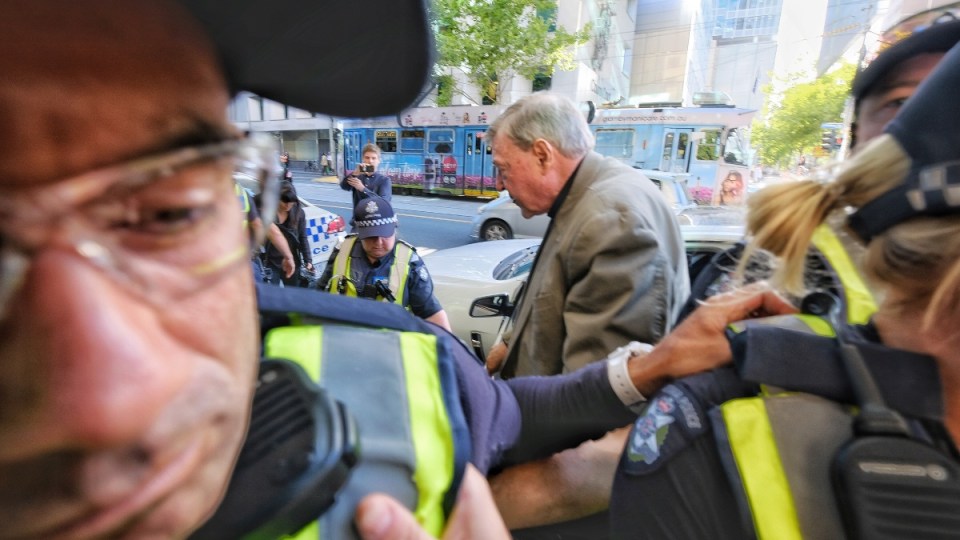 Cardinal George Pell has arrived for the start a his hearing into historical sexual abuse charges. Photo: AAP

Cardinal George Pell has arrived at court for the first day of a planned four-week hearing that will decide if he stands trial on historical sexual offence charges.

The senior Catholic cleric arrived at Melbourne Magistrates Court on Monday wearing a brown jacket over the top of an open-necked black shirt.

The 76-year-old arrived by car and slowly moved through a bustling media pack as police helped to clear a path.

Cardinal Pell is the highest-ranking Catholic official to be charged with historical sexual offences involving multiple complainants, which he denies.

Prosecutors on Friday withdrew one of the charges, relating to a complainant who died after the criminal proceedings began in 2017.

The committal hearing will initially be open to the public as the defence and prosecution finalise further administrative matters, but will quickly move behind closed doors as accusers begin their evidence.

The hearing will be closed to the public and media for two weeks while the complainants give their evidence, as required by law in sexual offence cases.

At the end of the four-week proceeding, it will be up to Magistrate Belinda Wallington to decide if there is enough evidence for the case to go to trial in the Victorian County Court.

As many as 50 people will be called as witnesses at the committal stage.

Cardinal Pell will not have to enter a formal plea unless committed to stand trial, but his barrister Robert Richter QC told the Vatican treasurer’s first court appearance last July that Pell will plead not guilty to all charges.

Dozens of Australian and international journalists joined a queue to cover the court case, with foreign interest from the BBC, CNN, The New York Times, The Wall Street Journal and Swedish National Radio.

The former Sydney and Melbourne archbishop and Ballarat priest has taken leave from his position as Prefect of the Secretariat for the Economy to fight the charges.