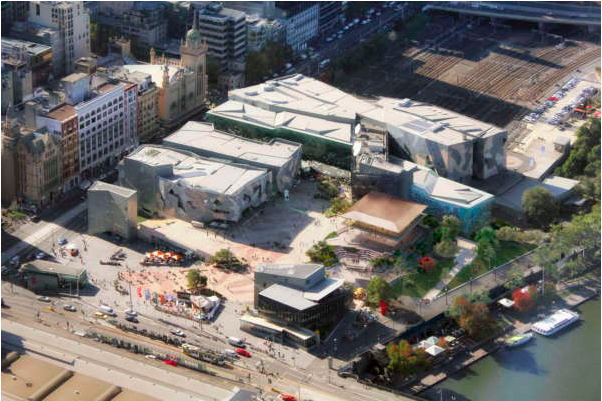 The artist impression is not the actual design. Photo: Federation Square

The maligned Apple store design at Federation Square will not be its final iteration, according to architects working with the government.

The Andrews government rolled out an artist’s impression of the “flagship” concept store, which has since been compared to a “Pizza Hut pagoda” and a pineapple.

But Federation Square architect Donald Bates, who is not behind the Apple store but approved of the plan, told a debate the pictures did not depict what would actually be built starting next year.

“We don’t know what the final design is yet,” Professor Bates told the Open House Melbourne on Tuesday night during a debate on the proposal.

State Government Architect Jill Garner, who also spoke in the affirmative, said the final design would “convincingly respond” to the site and be open to public interrogation.

“They haven’t nailed it yet,” she said.

The Age last month reported Apple had blocked the government from publicly releasing the plans.

Greens councillor Rohan Leppert argued against the proposal after last week moving a motion – unanimously passed by a City of Melbourne committee – calling for state Labor to go back to the drawing board.

State parliament will next week vote on Greens MP Ellen Sandell’s motion to block the plan.

The government has stood by its proposal.

On the other side of politics, Victorian Opposition Leader Matthew Guy decried the “awful” design resembled a pineapple.

“For better or worse, Federation Square was an international design competition. To then throw in something that looks like a pineapple in the middle of it is ridiculous.”

Alongside Cr Leppert was Esther Anatolitis, the executive director of the National Association for Visual Arts, who threw “big panini” into the mix of descriptors.

She argued Apple would be co-opting the premier public space for private gain, and would enjoy a photo opportunity at every protest, exhibition and other family and cultural events.

Federation Square chief executive Jonathan Tribe, who spoke in the affirmative, said the space needed to be financially self-sufficient and was not sustainable in its current form.

He added that there was no master plan for Federation Square, meaning even small reforms were not considered as a whole. Mr Tribe said he had been arguing for a master plan.

Architect Tania Davidge spoke on the negative shortly after launching community group Citizens for Melbourne to protest the proposal.

“People are outraged at this blatant privatisation of our premier civic space,” she said in a statement on Tuesday.

“We know there’s been dissent about the plan within the Andrews government. We’re hopeful the Premier will come to his senses and reverse the decision, before it comes to a vote next week. After all, it’s an election year and Victorians are united against this project.”

Under the plan, the Apple flagship store would replace the Yarra Building. It’s expected to attract an additional two million people to the square each year, and would host photography, music, arts and tech sessions.

It is slated to create an additional 500 square metres of new public space and open it up to the river.

Construction is expected to begin in early 2019, before the store’s 2020 opening.