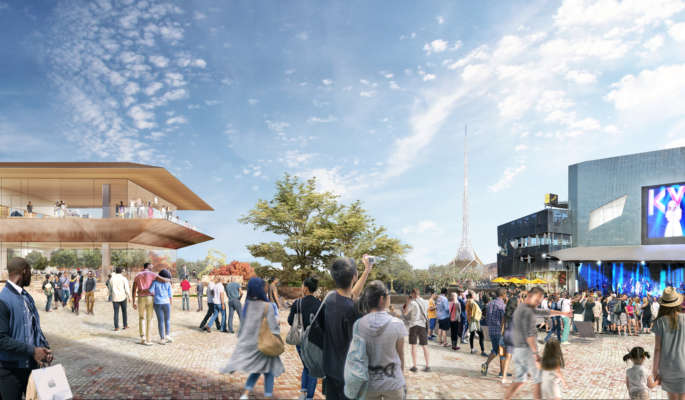 The Andrews government is facing a concerted push to dump its controversial plan to build an Apple store at Federation Square.

It came a day after the design was described as a “Pizza Hut pagoda” during a City of Melbourne committee motion put forward by Greens Councillor Rohan Leppert.

On the other side of politics, Victorian Opposition Leader Matthew Guy decried the “awful” design resembled a pineapple.

“For better or worse, Federation Square was an international design competition.

To then throw in something that looks like a pineapple in the middle of it is ridiculous.

Mr Guy said the square was not a shopping centre, and there were plenty of other suitable locations for the store.

“Fed Square is not the place,” he said.

Under the plan, the Apple “concept” store would replace the Yarra Building. It’s expect to attract an additional two million people to the square each year. The store is expected to host photography, music, arts and app sessions.

Mr Eren defended the proposal and design on Wednesday.

“The design respects and expands on the original vision for Federation Square – it will create 500 square metres of new public space and open it up to the river for the first time,” Mr Eren told The New Daily in a statement.

“We all want Federation Square to be at its best and this project will bring new visitors, business and life into the heart of our city.”

Ms Sandell’s disallowance motion is expected to be voted on in the next sitting week, in a fortnight.

In a statement, Ms Sandell said the government needed to “find an alternative location for an Apple store in the CBD”.

“We will move and revoke Labor’s poor decision,” she said. “Our public space should not be for sale.”

“We have had a meeting with officers from Melbourne city council and a meeting with the acting lord mayor a little while ago and we are confident that we can reach a position to see this store open,” Mr Andrews told reporters.

Councillor Nicholas Reece said the Apple Store at Federation Square could work with the right planning.

“I think, on balance, provided that it’s done in the right way, it could be a good thing for Federation Square,” he told the City of Melbourne committee on Tuesday night.

But he said the store desperately needed a new design.

“I’ve got to admit I haven’t run into a single person who actually likes the design,” he said.

It reminds of a Pizza Hut pagoda.

“I just think it’s something that rolled off an Apple Store production line and they’ve just plonked it in the middle of City of Melbourne’s premier civic square.”

Acting Lord Mayor Arron Wood was not opposed to an Apple Store in Federation Square, but said the design and lack of consultation was problematic.

He noted Federation Square was losing money, while Cr Leppert said a public space shouldn’t need to make a profit.

Construction is expected to begin in early 2019, before the store’s 2020 opening.