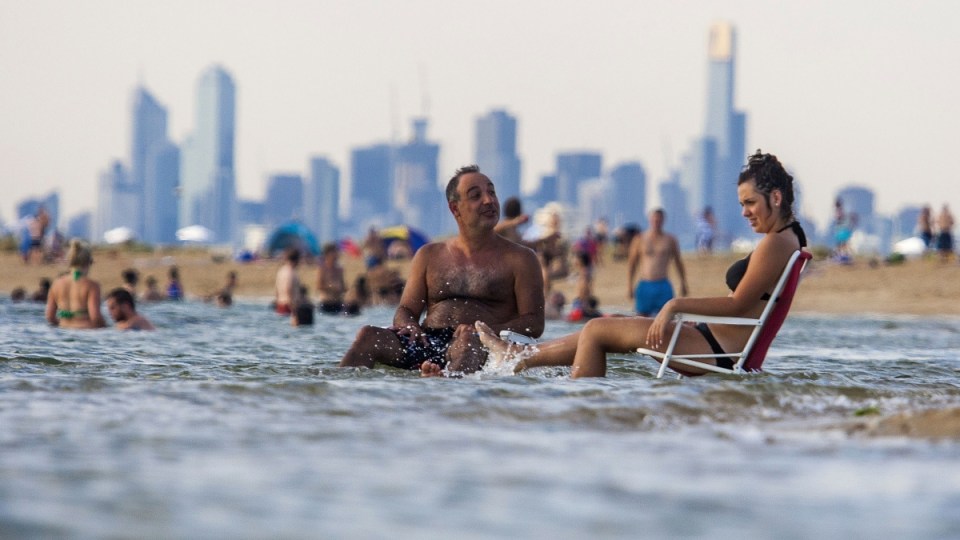 Melbourne can expect the cool change on Tuesday. Photo: Getty

As Victoria sweats through its latest heatwave, the Bureau of Meteorology says there’s unlikely to be any relief until Tuesday.

The state suffered another scorcher on Sunday, with the hottest temperature of 44.1 degrees recorded at Walpeup, near Mildura, at 4pm. The western district was also hit hard, with Casterton recording 42.4.

Melbourne had a top of of 39.4 at Laverton at 3.52pm with temperatures across the metropolitan area ranging from 36 to 39 degrees. Melbourne is expected to get the cool change mid-afternoon on Tuesday.

Sunday’s forecast minimum overnight temperature of 28 is among the hottest ever recorded, with the record being 30.5 in 1902. At 2am it was still 31 degrees.

Soaring temperatures are not unusual for Melbourne at this time of year, but it’s the humid conditions four or five times the norm that is causing the most angst.

It’s expected the humid conditions will remain oppressive into Tuesday, with a cool change and rain ushering in a more comfortable summer days in the mid-20s.

A heat health warning has been issued for those in the Mallee, where temperatures will remain high over the next couple of days. The Fire Danger Rating also remains very high in all Victorian districts.

Power outages were reported in some suburbs on Sunday, although most were localised and restored soon after.

The heat also forced the closure of the roof at Rod Laver arena for the mens’ final of the Australian Open.

Forecaster Stuart Coombs said there would not be any relief until Monday afternoon, when a cool change was expected in the western parts of the state.

“[It will be] extremely uncomfortable conditions, I think particularly Sunday night,” he said.

You don’t really get the chance to recover after the 39 degrees very well so it does make it very stressful on the body.”

“When you combine that sort of extreme heat with unusually high levels of moisture in the air it does make for very trying conditions, particularly for the very young and the very old.”

Victoria’s Emergency Management Commissioner, Craig Lapsley, said people should keep an eye on the most vulnerable, such as the elderly, children and pets.

“It’s going to be a hot day, a very hot night and hot again Monday, so it’s the next 24 to 36 hours that people need to think through,” he said.

“If you’re home with your pets you’re obviously able to look after them and one of the first things is about making sure they’ve got water and plenty of water that’s in the shade.”

With Victoria’s beaches packed, Mr Lapsley also warned people to be careful after more than 60 swimmers were saved by lifesavers.

A group of eight people had to be pulled from the water after getting into trouble about one kilometre from the flags at Fairhaven, near Airey’s Inlet.

There have been 18 reported drowning deaths in Victoria this summer, the highest number since detailed records began in 2000.

No relief for heatwave-hit Melbourne until Tuesday