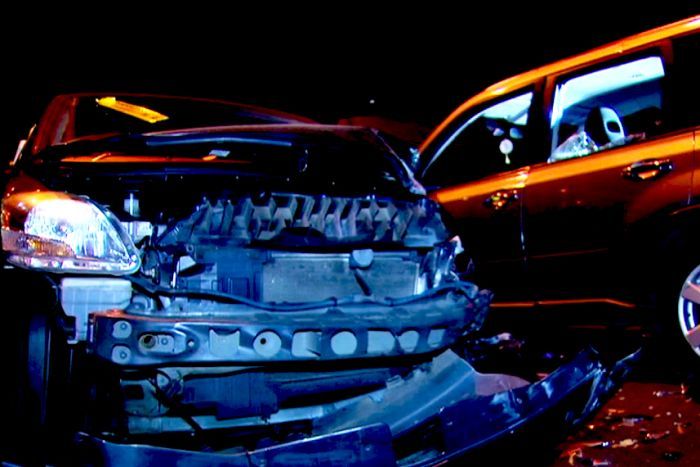 An 18-year-old woman says she was trying to save her dog when she was dragged along the road during a carjacking in south-east Melbourne, after a group of four people rammed several cars evading a police chase.

A group of up to four people stole a car in Seaford about 7:30pm on Monday, ramming two police cars and three parked cars while getting away.

“The car then forced its way out onto the main road in Frankston and continued down the road at a reckless pace, causing us to terminate the pursuit,” he said.

“This driving was reckless, dangerous and put innocent lives at risk.”

He said the group later pulled the 18-year-old woman from her car, before going on to steal a third vehicle.

“Further on down the road and a bit later on after police had broken off the pursuit, a number of carjackings [including one] where an innocent girl was dragged along [by] the car,” Senior Sergeant Burt said.

Commenting on a public Facebook post about the carjackings, a woman who said she was the victim said media reports that said she had been punched in the face were incorrect.

“I just want to let everyone know, I wasn’t punched in the face or hurt by the two guys,” Taylor Hall wrote.

“I was only hurt because I was trying to save my dog and got dragged by the car for about 50 metres before they hit the curb and I was flung off.”

She also wanted to correct an apparent misconception in the community that the offenders were of Sudanese descent.

“There is a lot of different stories going around but this is the true one. No they weren’t [Sudanese], they were two white men.”

Police arrested a 35-year-old woman who was left at the scene of car rammings and are still searching for the others.

One of the offenders has been described as a Caucasian man, who was wearing a white baseball cap and black T-shirt, while another is believed to have a tattoo on his neck.

Police said all involved are believed to have been injured in the incidents.

“I warn members of the public if they see people who have serious head injuries or are seeking medical advice, to call triple-0 or CrimeStoppers,” Senior Sergeant Burt said.

“Do not approach these people but call police immediately.”

He said there was “plenty of DNA in the car” and police were confident the offenders would be caught soon.