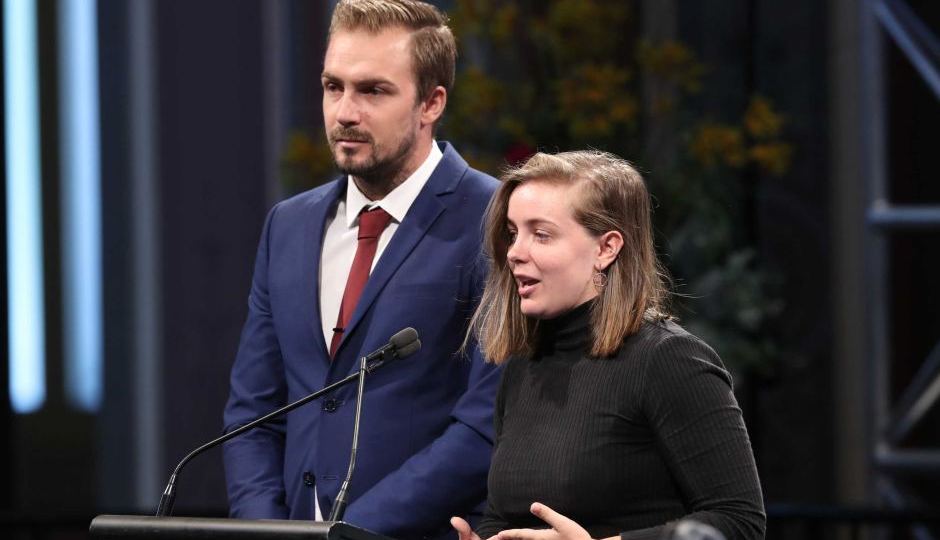 Kurt and Emily Mudie paid tribute to their sister Jess, who died after the attack. Photo: AAP

Family members of victims of the Bourke Street car attack have spoken of how they miss their loved ones and thanked the public for their care and support at a memorial service in Melbourne.

Six people were killed and many more injured when a car drove through the busy Bourke Street mall and along the footpath for several blocks on January 20, 2017.

Emily and Kurt Mudie delivered a tribute to their sister Jess, who was Emily’s twin.

“She was the most amazing person that I know, she would never ever fail to put a smile on my face, and I loved doing anything with her,” Ms Mudie said.

“I miss the really small things like us watching period dramas together, home shows and crime shows, ranting about whatever book we were reading at the time.”

Ms Mudie said her sister would never leave her and continued to motivate her, as she had in life.

“I don’t know where she is and it pains me to not hear her talk back, but I know she is always around listening, watching over and taking care of us all,” he said.

The siblings sent love to their families and friends, to those who had been on Bourke Street on that day, and others who had lost loved ones.

“We know that this is a super-crap time, but I’m told time is a great healer and we will always be there for you if you ever need it,” Ms Mudie said.

The wife of Matthew Si, Melinda Tan, said she had been supported by many through the heartbreak of losing her husband.

“The pain of losing Matt will never disappear,” she said.

“His time with us was cut short, he was only 33 years old and he was always rushing home to our daughter Aria.

“That day he dropped her off at childcare and never came back. I’ve had to adjust to a new life that will always be missing a loving husband and father.”

Ms Tan said she was comforted that emergency crews did their best to save her husband and that he did not suffer alone.

Melbourne Symphony Orchestra’s Sophie Rowell performed a violin solo for Mr Si, who was himself an accomplished violinist.

Matthew Bryant, the father of three-month-old Zachary Bryant, fought back tears as he spoke about his son.

“He was a healthy and strong little boy with a long, bright future ahead of him,” he said.

“Our connection with Zachy started long before he was born — we named him a couple of months into the pregnancy and couldn’t have been more excited to welcome that little man into our family.

“From the first time I held him, it was pure love.”

Mr Bryant said he would always be grateful and blessed to be Zachary’s father.

The couple had a third child, Zayne, last month, joining their older daughter Zara, who was with Zachary when he died.

“While he unfortunately will never have the chance to meet his older brother, we endeavour to always keep the memory of Zachy strong and alive,” Mr Bryant said.

Victorian Governor Linda Dessau honoured those who had been injured, the first responders and families who had lost loved ones.

“Of course we can’t magically ease the heartache for you, but we can gather together with you so that you might know that so many people care for you,” she said.

“To show that we have not forgotten your loss, and to offer you whatever support and comfort that we can.”

She also paid tribute to civilians who helped on the day.

“Those who responded when they found themselves in the midst of something for which they could not possibly have been prepared … who did all they could do to humanly help and provided us with a much appreciated beacon of hope by their goodness.”

The service took place at the Royal Exhibition Building in Carlton this afternoon.

The accused driver James Gargasoulas, 27, has pleaded not guilty to murder and attempted murder charges.