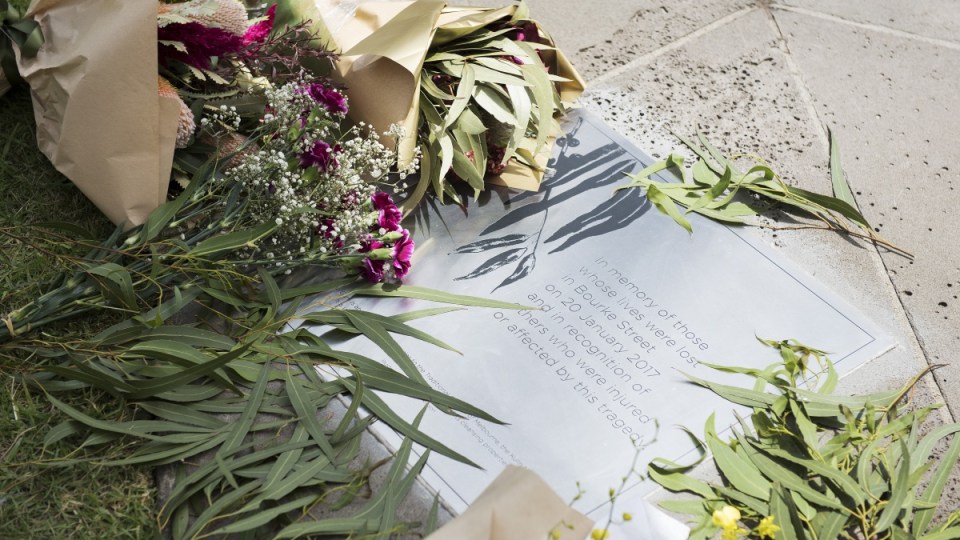 Floral tributes at the memorial unveiled in Parliament gardens on the weekend. Photo: AAP

One year on from the fatal Bourke Street car rampage, Melbourne continues to weigh the emotional impact and lessons learned from the incident.

Saturday marked a year since a car mowed down dozens of pedestrians, killing four adults, a child and a three-month-old baby.

A public memorial service will be held on Tuesday and flags will be flown at half-mast, while two plaques were unveiled at a private ceremony in Parliament Gardens at the weekend.

As bereaved families and survivors mark the milestone, Ambulance Victoria’s chief believes the tragedy has prepared emergency services to better respond to such incidents.

State Health Commander Paul Holman told the ABC a debrief after the event led to 32 findings about how to respond better to similar events in future.

“With these type of incidents, we think we’re going to see more of this type of thing,” Mr Holman said.

“We need to learn from it, we need to get it better, because it’s all about saving lives.”

Mr Holman said all paramedics on the job had risen to the unique challenge of treating injured people spread out over three city blocks –an area spanning about 700 metres.

Doctor Carl Luckhoff from the Austin Hospital – where seven of the 25 people injured were sent – agrees there were lessons learned on the day.

“I think what made Bourke Street quite unique was that it was the first time something like that had occurred,” Dr Luckhoff said.

“We learn a little bit from every event that you go through. Unfortunately, as sad as it is, you get better with it each time.”

With a criminal trial and a coronial inquest still to be held, a police review into the events is yet to be fully realised. However, the increased presence of uniformed officers in the city has been the most visible policing response.

The Melbourne City council responded by rolling out a new emergency alert speaker system to complement existing CCTV cameras, while the  strategic placement of concrete bollards was initially derided before they became another uniquely Melbourne street art feature.

“We’ve got critical incident response teams which we’ve shaped and refocused,” he said. “Behind the scenes, we’ve done a lot of training with our staff in regard to what their vehicle can do and withstand if it’s rammed by another vehicle.”

Police noted that a pre-Christmas incident in Flinders Street, that killed one person and injured many others, saw some of the new procedures implemented in real time.

“Unfortunately through practice you get better at it, much, much better at it,” Assistant Commissioner Leane said.

“We worked through a range of issues through Bourke Street, and [Flinders Street] was much more seamless.

“Our response was instantaneous … the responding police were there within moments so I think that demonstrates we’ve got a capacity, but we have to be vigilant.

“We’re already better prepared, and I think Flinders Street demonstrated that. Every patient was treated and transported within 30 minutes, and that was 16 patients.”

At Saturday’s private service to remember those affected by the tragedy, Premier Daniel Andrews took solace from the response by all Melburnians.

“Today was an opportunity for us to again remind those families that we stand with them, that they’re in our hearts, they’re in our thoughts and prayers and they will always receive our support.”

Melbourne one year after the Bourke Street attack