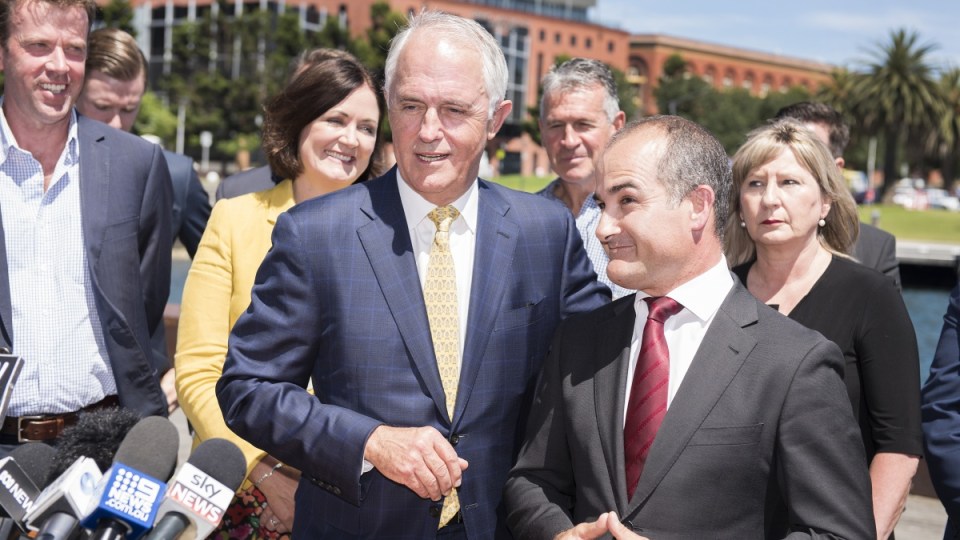 The Prime Minister and Victoria’s acting Premier have had an awkward exchange about the state’s handling of youth crime at a press conference in Geelong.

The federal government has previously accused the state of dropping the ball on gang violence and preventing police from taking a strong role on the issue.

Malcolm Turnbull and James Merlino, who is standing in as premier while Daniel Andrews is in India on an official trip, were in Geelong to announce a deal between the Commonwealth, state and local governments to give the regional city greater priority for major projects.

The pair were asked if the announcement was part of an “improved and harmonious relationship” between Canberra and Spring Street.

“There’s just love bursting out all over the place,” Mr Turnbull said.

But when asked by a reporter if they had a chance to talk about other topics they perhaps did not see eye to eye on “like Victoria’s handling of youth crime”, the conversation became less than friendly.

Both politicians said they did not want the event to become an exercise in political point scoring, but Mr Merlino commented on the record number of people at the Australian Open, in an apparent reference to Home Affairs Minister Peter Dutton’s comments earlier this month that Victorians were too afraid to go out.

While Mr Turnbull, who has previously expressed concern about “growing gang violence and lawlessness in the state”, spoke about how the federal government was doing everything it could to keep the community safe.

“The advice that I have from the Federal Police Commissioner, who works very closely with your commissioner, James, is that the issues here are very much a question of community policing and the administration of the justice system here in Victoria,” he said.

“We don’t have the same problem in the same way, for example, in Sydney, which is a similar big city to Melbourne with a very diverse community.”

Mr Merlino interrupted follow-up questions from reporters to note the reduced crime rate in the state.

“Malcolm, in terms of what you can do to assist, there is firearms legislation in the Victorian Parliament,” he said.

“Your counterpart, you mentioned Matthew Guy, Matthew Guy and the Liberal Party are stalling that legislation and seeking to water it down.

“The assistant commissioner of Victorian police has described that firearms legislation as a game changer in terms of dealing with organised crime, so the best thing you can do, Malcolm, for Victoria is get on the phone, talk to the mobster’s mate Matthew Guy and get the Liberal Party to support the legislation.”

Mr Merlino’s remarks were in relation to revelations last year that Opposition Leader Matthew Guy had dinner with Tony Madafferi, who is alleged by police to hold a senior rank in Australia’s secretive Calabrian Mafia.

The exchange came to an end when federal MP Dan Tehan interjected, and Mr Turnbull changed the topic to his upcoming visit to Japan.