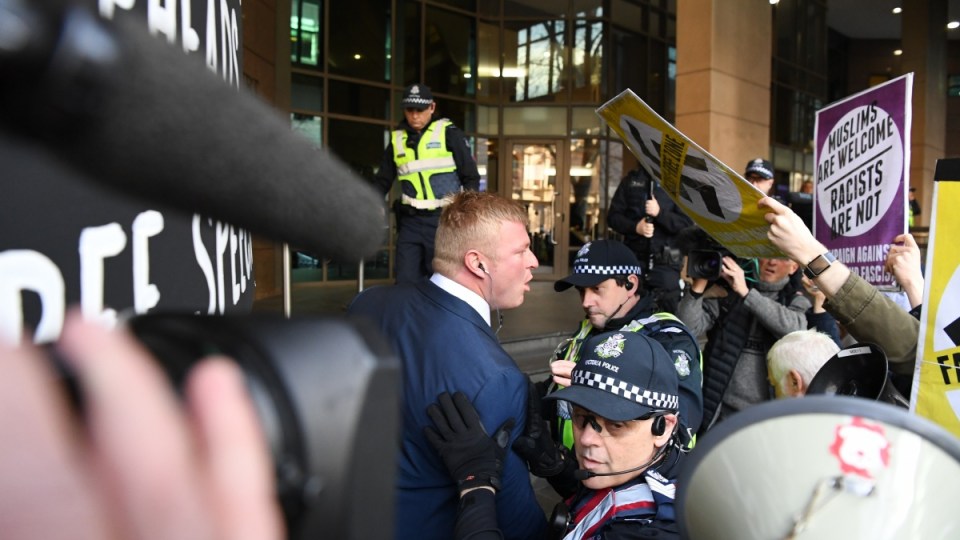 A far-right vigilante group has planned to take the so-called African youth gang crime wave into their own hands at a meeting “not for the faint-hearted”.

The True Blue Crew were forced to move the meeting at the last minute on Sunday, after Eddie’s Pool Bar and Bandroom in south-east Melbourne cancelled the booking.

The New Daily understands the Cheltenham venue turned them away when the owner learned who they were.

Antifascist Slackbastard said between 30 and 40 people had already arrived about 4pm, and were redirected to a nearby office space.

There, about 50 people – mostly men – discussed vigilante action in the style of a neighbourhood watch, according to Seven News.

Members said they would attend the scene of a robbery or incident as it unfolds, believing that police are ill-equipped to tackle the perceived gang crisis.

“It’s about time the community get involved. It’s clear to see that police can’t save us all,” True Blue Crew’s Kane Miller told the network.

On Facebook, the group said the second half of the meeting was “for those ready to take a stand on the streets”.

“This part of the meeting isn’t for the PC [politically correct] so keep that in mind. PC isn’t going to stop people’s houses being invaded, innocent people being attacked, etc.”

In other posts, the group denied it would obstruct police efforts and rejected its members were far-right.

“What we actually are is everyday Australians fed up with seeing what’s happening around us with no clear end in sight.”

One commenter boasted she was part of the violent Cronulla riots in south Sydney in 2005.

“Good luck all! I was there for the Cronulla riots! Aussie pride! Show them what we are made of!” the woman wrote on the True Blue Crew Facebook page.

Details of the meeting were kept under wraps until Sunday morning, when a message was sent out.

Attendees were told they would need to surrender their mobile phones for the duration of the meeting and provide identification before entering.

“Due to the seriousness [sic] nature of the meeting we are taking certain measures of security,” said the message, seen by The New Daily.

“Upon arrival you will be given a sticker with a number to write your name on, and will then place your sticker on your phone and asked to turn it off which will be placed in a secure container and can be collected when you leave by showing your sticker.

“You will be required to show photo ID and agree to a metal detector wave over.”

The security measures were for their protection and privacy, the message said.

A Victoria Police spokesperson confirmed they were aware of the meeting.

“As ever, we respect the rights of people to meet and air their views on political matters. We will not tolerate however any resulting acts of violence or antisocial behaviour,” the spokesperson said.

“Police are responding strongly to the recent offending. We have increased patrols in affected suburbs and are taking a zero tolerance approach when crimes are being committed.”

Blair Cottrell, of the notorious United Patriots Front, claimed police units and a helicopter were circling the meeting.

“Currently at a community meeting in southeast Melbourne with local residents preparing to discuss the immigrant crime problem. There are police units driving around and a police chopper in the air hovering above the venue,” he wrote on Twitter.

Premier Daniel Andrews said people were “free to meet and discuss whatever matters they want to”.

“What I would say though, is Victoria Police are best able and best equipped to fight crime and keep the community safe.”

Police and African-Australian community leaders on Sunday had a high presence in the Wyndham area in south-west Melbourne “to jointly address antisocial behaviour and youth offending”.

It comes after weeks of focus on the subject, as federal politicians attacked the state Labor government and courts.

True Blue Crew did not respond to a request for comment.