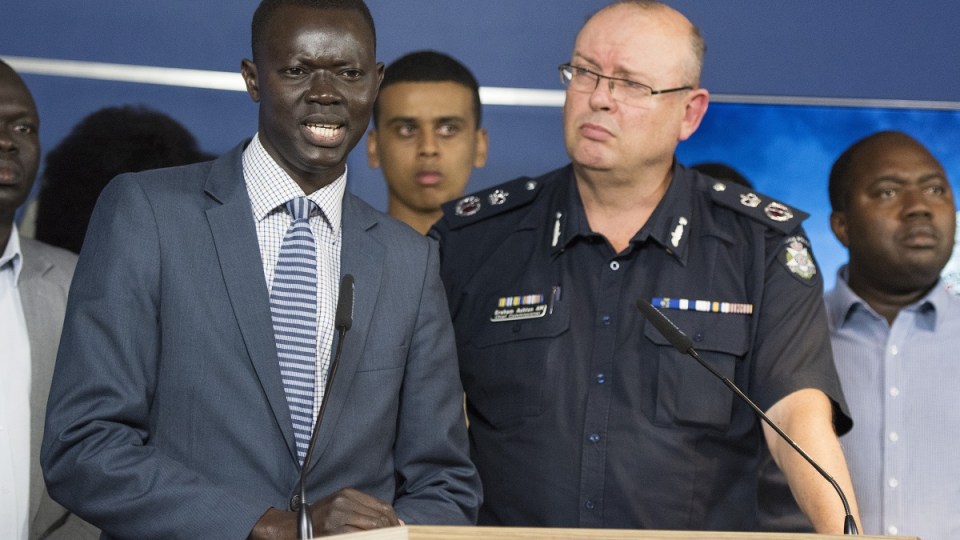 Victoria’s most senior police officer says claims the state is not a safe place to live are “complete and utter garbage”, while making it clear the new taskforce working with African groups will deal with threats directed to law-abiding community members.

He said police had been dealing with home invasions and car-jackings for some time and generally “catching the offenders quickly”.

“What’s changed over and above that … has been an increase in public disorder and public behaviour, misbehaviour in public by groups of young people,” Chief Commissioner Ashton said.

In the wake of several high-profile incidents involving African youth, federal Liberal MPs including Greg Hunt described gang crime as being “out of control” in Melbourne, while Minister for Home Affairs Peter Dutton claimed Victorians were too afraid to go out for dinner.

“There are people being affected by crime, and that’s always been the case and it’s the same in every city in Australia … [but] Victoria is one of the safest places in the world to live,” Chief Commissioner Ashton said.

I think everyone in this room would go out places for dinner, I don’t think anyone’s sitting with the sheets cowering over their heads.”

Community leader Richard Deng also called on politicians and the media not to divide the community over the issue.

“I would like to say again to the politicians – it is time you join hands with the community, engage, let’s put politics aside and work together,” Mr Deng said.

“Using crime for political gain is not acceptable. As a community, we call on all politicians to work with us, work with Victoria Police, as a way forward.”

Chief Commissioner Ashton acknowledged people were concerned by what they had read and seen on the issue but said the crime rate in Victoria was going down.

“I don’t think it’s a crisis … I think if you put it into context you’ve got a few hundred offenders engaging in offending in a city of 4.5 million people,” he said.

“The last two quarters we’ve reduced total crime in the state, we’re continuing to do that.”

Offenders not racially identified at Torquay

Chief Commissioner Ashton also parried questions about why police often identify offenders as ‘African’, given a public affray in Torquay last week did not identify the offenders as ‘white’.

“It’s always a tricky one to try and manage well to be frank with you,” he said. “The instructions that I have given my people consistently is … having a description that will better [be able to] catch the offender … We do have to be careful with our language.”

The African taskforce will meet for the first time on Friday and is supported by senior community leaders in Melbourne.

Police said the taskforce would assist law enforcement by:

Assistant Commissioner Andrew Crisp said the third element of the taskforce was necessary due to threats being made to law-abiding members of the African community.

“I know [what] a number of people here today and others in the community have been subjected to [is] quite inappropriate, is putting it mildly, but subject to death threats,” he said.

“I think it’s really important this community has the opportunity to connect with Victoria Police to look at how best we can protect the community, how we can investigate these matters, if it’s to do with racial vilification or hate crimes.”

Chief Commissioner Ashton pledged Victoria Police would continue to take a “zero-tolerance” approach to youth offending, which he said was often the result of complex issues of social disadvantage and unemployment.

“What we will be doing from today, though, is involving community more in the solutions and community is very much interested to be involved.”

But he reiterated that while police were describing the incidents as “street gang behaviour”, the force did not consider the crime was being committed by “structured, organised gangs” of people.

“It’s much more loosely organised than many might think in that regard. I think that’s the point – it’s not structured and organised, like a bikie gang or other gangs in Victoria.”

African-Australian Kot Monoah acknowledged the community had problems that needed tackling, but criticised politicians and the media for their handling of the issue.

“We understand that there are significant behavioural issues with young people, compounded by a number of issues such as drug and alcohol and significant other issues,” he said.

Speaking of #AfricanGangs I met a delightful African gang at my sister’s house in Armidale at Xmas. A Nigerian woman (undertaking a PhD at UNE) and her 6 absolutely gorgeous kids.

He said a number of young people had been racially profiled in shopping centres and parks, as a result of the recent attention to the issue.

“It impacts on a number of law-abiding, innocent people,” he said.

I was walking our baby tonight and stopped at the nearest park, watching a young South Sudanese-Australian man showing his beloved the finer points of basketball. They seemed almost apologetic to be there. I'm not sure we should be doing this to them.