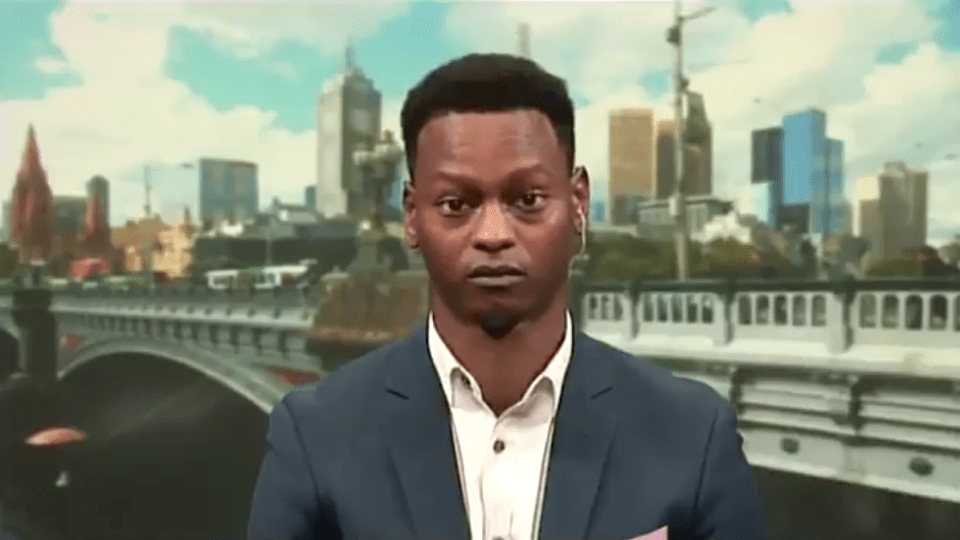 A self-proclaimed professional footballer and brand ambassador appears to have been sprung lying about his credentials after he accused authorities of downplaying a so-called African youth crime wave.

Nelly Yoa, who claims to work with troubled South Sudanese youth, last week declared it was “immoral and inexplicable” to say there were no Sudanese gangs in Melbourne in an article for The Age newspaper.

He also appeared on radio and television across the country as Victoria Police conceded some African youth were behaving like “street gangs”, but not organised crime gangs.

Fairfax has since been forced to apologise after it was revealed Mr Yoa’s opinion piece appeared to be plagiarised.

And the Sudanese community says he isn’t a youth worker, but merely a self-promoter.

The only youth work Mr Yoa can be found to be involved in is with Afri-Aus Care as a youth co-ordinator and board member. Afri-Aus Care appears to have removed Mr Yoa from its website, and did not respond to requests for comment on Monday.

The contradictions in Mr Yoa’s stories are now diverting attention from the African youth crime debate and the way it is being used by federal Coalition figures in a Victorian state election year.

On Monday, American Express confirmed Mr Yoa has never been one of its brand ambassadors in Australia.

A spokesman was looking into whether Mr Yoa was an ambassador for the brand internationally. However, Mr Yoa’s LinkedIn page lists the employment as based in Melbourne.

Nike has not responded to The New Daily, but Fox Sports says it has confirmed Mr Yoa has no sponsorship deal with the sportswear brand.

Mr Yoa appeared to feature in a Mercedes-Benz television advertisement in a video posted on his Facebook page.

He claims to star in a Kmart photo campaign in another post.

Both Mercedes-Benz Australia and Kmart told The New Daily Mr Yoa had never worked with the brands.

Mr Yoa told media he had a meeting with Victorian Premier Daniel Andrews over the youth crime issue on Wednesday.

The Premier’s office says no such meeting or contact has occurred.

He also claimed sprinters Usain Bolt and John Steffensen​ rushed to hospital to witness the birth of Mr Yoa’s child in Ballarat in 2016. Steffensen has denied that claim, according to The Age.

And English soccer club Queens Park Rangers, where he says he spent five months in 2013, could not substantiate his playing claims.

“Certainly no recollection of this and no records either,” a QPR spokesman told AAP.

Mr Yoa has threatened “slothful” journalists with legal action on Twitter and stood by his claims.

I can confirm I did go on trials with both Chelsea and QPR. Confirm this with the club if you must.”

The Age has added a disclaimer to Mr Yoa’s opinion piece, stating there was no evidence to back his claims he had played for Chelsea, nor that he was training with an AFL team.

“Additionally, some of his ‘ideas’ for solutions to the issue of youth crime appear to have been plagiarised from an article written in 2015 by Manola De Vos,” the disclaimer said.

Mr Yoa has denied plagiarising parts of her article.

Where the government stands

Home Affairs Minister Peter Dutton, from Queensland, went so far as to say Melburnians were afraid to go out for dinner.

On Monday, Victoria’s Opposition Leader Matthew Guy said comments from his federal colleagues had not inflamed tensions over the issue, and unemployment was not an excuse for crime.

“There’s a lot of unemployment in many communities, there’s no excuse for breaking the law,” he told reporters.

But after a week of debate about ‘African youth gangs’, social media users have been quick to highlight that reporting of a youth rampage in Torquay last Thursday did not mention the ethnicity of those involved or attract the same level of attention of politicians and media.

Interesting there was no mention of ethnicity in the reporting of the riot in Torquay the other night. 100 youths weren't even called a gang#geelongadvertiser#biasedreportinghttps://t.co/MXP1aeBCBp

A Fairfax Media-ReachTEL poll taken in key marginal electorates on Friday shows youth crime will be a key issue in the November state election.

‘Youth leader’ Nelly Yoa under pressure and running out of credibility