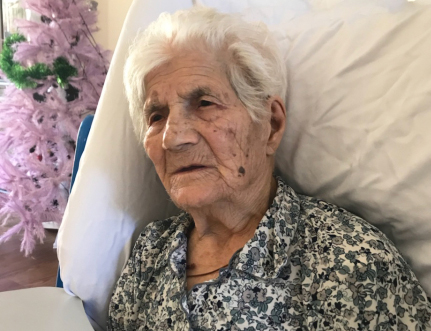 Dimitra Pavlopoulou, 97, disappeared from her Melbourne nursing home on Saturday. She was found by police on Sunday. Photo: Victoria Police

A woman charged with kidnapping a 97-year-old resident from a Melbourne nursing home allegedly believes the woman is her mother, and that her mother’s death and funeral several years ago were faked as part of a conspiracy.

Irene Moschones, 51, appeared before Melbourne Magistrates Court on Sunday charged with kidnapping and unlawful imprisonment after Dimitra Pavlopoulou, 97, was taken from her Clarinda nursing home on Saturday.

Ms Pavlopoulou was wheeled out of her room at Clarinda Manor about 12pm on Saturday and put in a car, with her wheelchair left behind.

Police found Ms Pavlopoulou at a Cheltenham home at about 9.30pm on Saturday.

It was alleged the 51-year-old believes Ms Pavlopoulou is her mother, even though investigators have established Moschone’s mother died in 2013.

Sgt Eales said Moschones believes “there was a conspiracy against her committed by a group of people to get her inheritance from her mother”.

Moschones has previously requested her mother’s body be exhumed so DNA testing can disprove her mother’s death and funeral.

She has also been visiting nursing homes in a bid to try to find her “real” mother.

“She had been to many nursing homes on many other occasions,” Sgt Eales said.

“She [Moschones] is in no way related to the victim, and she is not known to anyone in her [the victim’s] family.”

Magistrate Ross Betts denied Moschones bail after police said they were concerned about her mental state.

“She requires psychiatric assessment due to her delusional thoughts towards the victim and her thought processes of the victim being her mother,” Sgt Eales said.

Police also said they were worried Moschones would again try to take Ms Pavlopoulou from the nursing home and put her life at risk a second time, as she suffers from several conditions that require medical care.

Ms Pavlopoulou’s family on Sunday thanked police and the public for their help locating the 97-year-old.

“What happened yesterday is for the movies,” they said in a statement.

“This rare occurrence even baffled some of the most senior police officers at the scene.”

The family said Ms Pavlopoulou’s kidnapping “shook her family to the core”.

Moschones will return to court on Wednesday.