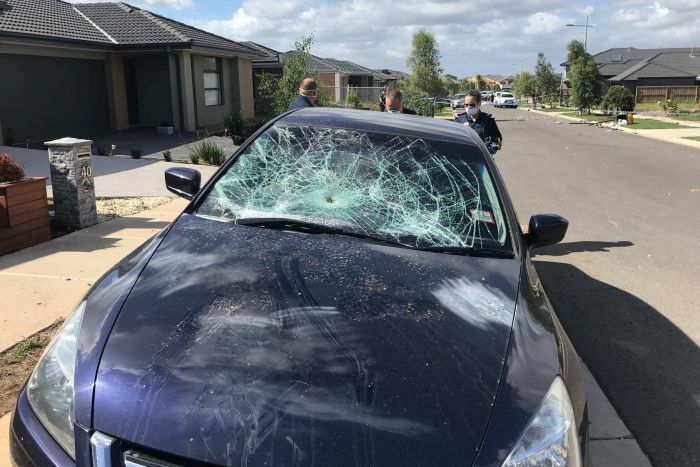 A car damaged when an Airbnb property was trashed by a group in Werribee in December. hoto: ABC News / Joanna Crothers

The Victorian government has hit back at a federal Minister’s claim that gang crime was rampant parts of Victoria.

Federal Minister Greg Hunt said on Monday that African gang crime was “out of control” in parts of Victoria and tougher sentencing laws are needed.

“The failure is not the police, but the Premier.”

Prime Minister Malcolm Turnbull added that he was “very concerned about the growing gang violence and lawlessness in Victoria”, particularly in Melbourne.

“This is a failure of the Andrews Labour government.”

The prime minister said Victoria Police had the capacity to do the job but needed better directions from the state government.

“But what is lacking is the political leadership and the determination on the part of Premier Daniel Andrews,” Mr Turnbull said.

He said authorities need “leadership, the direction, the confidence of the government to get on with the job and tackle this gang problem”.

Their comments come after some high-profile crimes blamed on groups of young African men, including the trashing of an Airbnb property in Werribee and the repeated destruction of a community centre in Tarneit.

A spate of jewellery store robberies in 2016 and 2017 by groups of men described as being of African appearance, also raised questions about gang crime in Victoria.

The state government has hit back, saying the Turnbull government was playing political games over youth crime.

“We will take our instructions and advice from Victoria Police,” acting Roads and Road Safety Minister Phillip Dalidakis told reporters in Melbourne.

“We certainly will not be taking suggestions or advice from a bloke who can’t even put on a life vest when he’s on a boat in Sydney Harbour.”

The prime minister was fined $250 in December for not wearing a life jacket while moving his dinghy near his harbour-side Sydney home.

“If Malcolm Turnbull wants to play games instead of working in collaborative effort, then he can do so and talk to himself,” Mr Dalidakis said.

Victoria Police Deputy Commissioner Andrew Crisp last week maintained Melbourne did not have a gang problem, and urged the media not to label groups of young thugs as “gangs”.

“I don’t accept for one minute that we do have gangs,” Deputy Commissioner Crisp said at the time.

“I urge you [the media] not to play up to the ego of these young people by calling them a gang, because they’re not a gang.”

Watch the ABC’s video of the Werribee incident

When asked about the government’s comments today, Deputy Commissioner Crisp maintained Victoria Police was “well and truly on top of” youth crime.

“The data shows … we’re locking up more and more people and, at the same time, we’re focused on some of the underlying social issues,” Deputy Commissioner Crisp said.

He said there had been a shift in behaviour in the western suburbs, around Tarneit, following police operations targeting youth crime.

“I’m very confident where we’re going and how we’re tackling youth crime in this state.”

African gang crime ‘out of control in Victoria’, minister claims