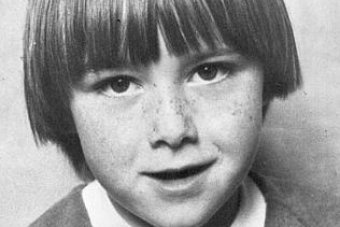 Kylie Maybury's body was found in a gutter in Preston the day after she went missing.

Barefooted six-year-old Kylie Maybury was walking home happily from an errand to the shops clutching a bag of sugar for her mother when she was snatched by a “monster”.

It was Melbourne Cup Day in 1984, and for a change Kylie’s mother had allowed the little girl to walk the 140 metres to the shop alone in suburban Preston East.

But she never made it home. Her body was found face down in the gutter the next day – she’d had been drugged, raped and strangled.

More than 30 years later, as the monster was finally brought to justice, Kylie’s mum Julie Ryan made it clear what she’d do to Gregory Keith Davies if given the chance.

“I’d like to kill him myself,” she said outside court.

Davies, 75, was sentenced to life on Thursday after pleading guilty in May to raping and murdering Kylie.

Justice Lex Lasry was disgusted by Davies’ terrible crime, and wondered how he kept it secret for so long.

“This girl did nothing except walk to a shop, and at six years old she lost her life,” the judge said during sentencing.

“You saw her and chose her at random. Your conduct was simply disgusting.

“You lied to police at the time and kept what you had done to yourself for 33 years.

Davies, then aged 42, was driving in the neighbourhood when he saw Kylie, stopped and snatched her into his white station wagon.

Davies drugged her with sleeping medication, raped her and finally suffocated her.

“It is clear to me you treated her with absolute contempt,” the judge said.

“The sentence passed on you can never repair the damage you have caused.”

Davies was ordered to serve at least 28 years in prison before being eligible for parole.

The killer wasn’t identified until 2016 when his DNA was matched to semen on Kylie’s clothing and body.

Ms Ryan said she was relieved the saga was over and that Davies would die in prison.

“He’s a monster. You can’t call him anything else,” she told reporters outside court.

“How can he do that to a little girl? But you know what? It’s all over now.

“I’ve accepted it and I can move on with my husband.”

“Don’t let your kids just go to a milk bar. Don’t make the mistake I made,” she said.

“I trusted her. I used to follow her all the time. But this one particular day I couldn’t.”

She said Kylie was a “beautiful little girl” who was “good at everything”, particularly sports.

Davies confessed to his crimes in May.

He was later attacked in prison with boiling water, requiring skin grafts to 15 per cent of his body.