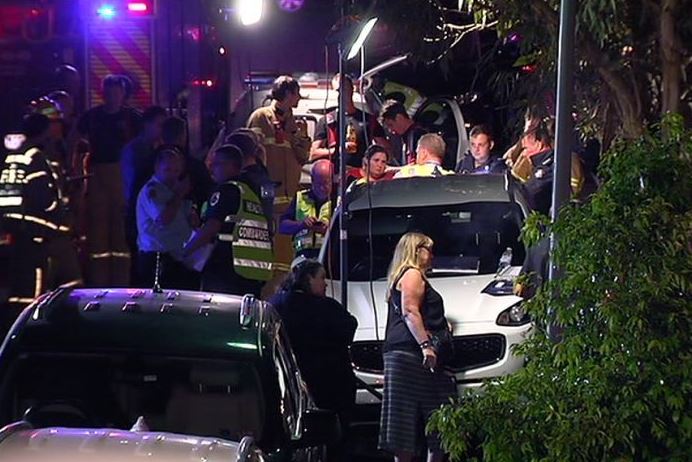 The quiet suburban street became an instant of chaos and tears after the horrific balcony collapse. ABC

Two women are dead and 17 others in hospital after a crowded balcony collapsed during a Christmas party in Melbourne’s north-east on Saturday night.

It is believed more than 30 people were on the wooden balcony at a house in Balinga Court, Doncaster East, when the structure gave way at about 10.30pm.

The gathering, a Tupperware Christmas party, was drawing to a close when guests assembled on the wooden balcony for a group photo, according to reports.

A 59-year-old Croydon woman died at the scene while another woman, 37, died in hospital early on Sunday morning.

Neighbours were shocked at the horror accident and did what they could to help the injured.

“The crash was biblical, the sound of it was nothing I’ve heard before,” Andrew Stone told reporters.

“People were bringing out chairs, and pillows and blankets and things like that just to help out the people who were injured,” he said.

In chaotic scenes on what had been minutes earlier a quiet suburban street, the injured were picked from the debris and shuttled by a fleet of ambulances to the Box Hill, Austin and Maroondah hospitals.

He said it was a chaotic scene and required a major emergency management response, with more than a dozen ambulances called to the property.

About a dozen people were treated by paramedics at the scene but did not require hospitalisation.

“This is a very tragic incident for those involved and our thoughts are with them and their loved ones at this time,” Mr Holman said.

Police are investigating and will prepare a report for the coroner.

Acting Superintendent Kerin Moloney said the accident could not have come at a worse time.

“This is a tragic incident that has been magnified by the fact we are only one week away from Christmas,” he said.