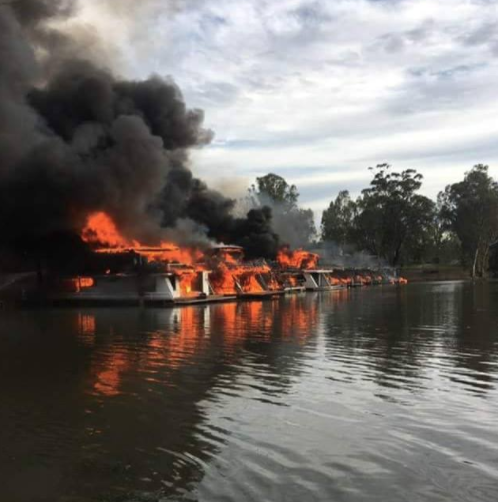 At least 15 houseboats were moored at the marina when fire ripped through them. Photo: Twitter

Dozens of families’ Christmas holiday plans have been left in disarray after nine luxury houseboats were destroyed in a massive explosion on the Murray River.

The houseboats, with an average value in excess of $250,000 and moored side-by-side at Deep Creek Marina in Moama on the NSW/Victorian border went up in flames, with bystanders describing the inferno as “absolutely devastating”.

The boats were destroyed by a fire that broke out about 6.30pm on Thursday, with firefighters working into the early hours of Friday to maintain it.

The blaze began in a single boat but quickly spread to engulf another eight, leaving each with “extensive damage”, police say.

Scene of the fire near Moama this morning. Witness said fire appeared to start in the first one, saw smoke coming from an air conditioner pic.twitter.com/hm4GwSbEKy

Images from the marina show the boats reduces to charred skeletons, with the remains now a crime scene as detectives work to figure out what sparked the blaze.

No one was injured in the incident but the damage bill is reported to be in the millions of dollars.

Firefighters were on the scene for six hours as they battled the blaze and worked to contain fuel from spilling into the river, Fire & Rescue spokesman Norm Buckley said on Friday.

Another five boats also moored in the section of the marina were reportedly saved by bystanders.

One woman whose boat was moored in the marina at the time which escaped the blaze, said it was devastating.

“Our thoughts are with all our neighbours who lost their boats. We are extremely grateful to all those who bravely saved ours along with five others,” she wrote on Facebook in the aftermath.

“No words could describe the scene tonight. So many families affected by this. So sad,” she said.