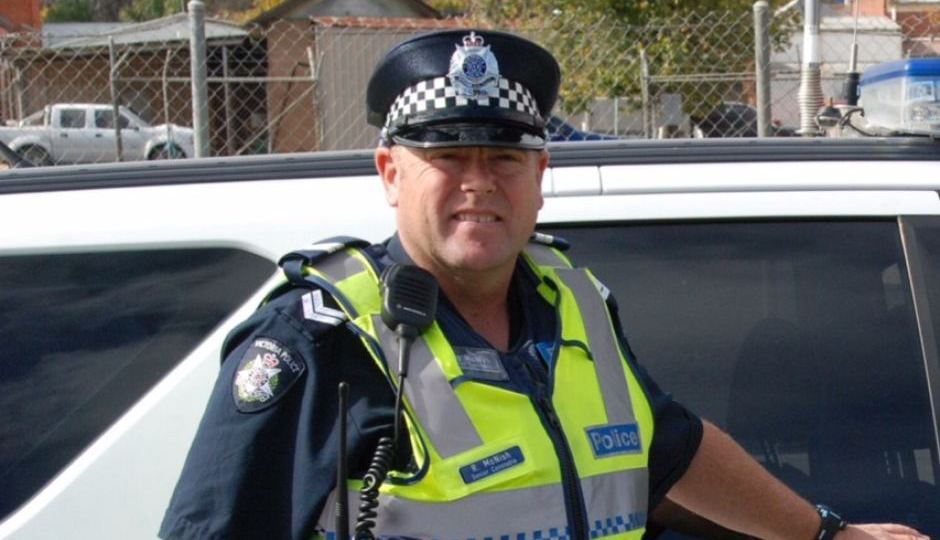 A grieving Victorian widow has taken the state’s police to court in an attempt to prove her husband’s suicide was work-related.

Wendy McNish has spoken out for the first-time about the suicide of her husband Raymond McNish at Moama early last year.

The New South Wales Coroner has been examining the case but Mrs McNish has also taken legal action against Victoria Police.

Her lawyer Travis Fewster from Maurice Blackburn said his client was trying to prove Mr McNish’s psychological disturbance came about because of employment stress.

“We will be saying that at the time he took his life, he just did not know where to turn, what to do,” Mr Fewster said. “It was absolutely work-related.”

Mr Fewster said a medical report from a GP suggested Mr McNish had lost faith in society and was disenchanted.

“We have also got a suicide note that said he could no longer have any fun, he could not laugh and he was not smiling anymore,” he said.

“So we have got those things put together as well as the trauma he saw day and in day out and what we consider is a lack of support from some of the parties involved,” Mr Fewster said.

Country copper was a thorough worker

A great country copper was how Wendy McNish described her late husband.

“He was a very diligent, thorough worker and he found he had put his hand up for help and that was not there,” she said.

He took his own life in February last year aged 50 while a senior constable based at Echuca in northern Victoria.

Now she has taken on the force and hopes it can make changes to better support staff and their families.

“He felt alone and unsupported within his job,” Mrs McNish said.

She said she wanted the force to be more open-minded about mental health measures it could implement.

“Anything that helps them to cope with what they are seeing every-time they close their eyes has got to be a benefit and help them be more balanced,” she said.

I’m not the only one out there that this is happening too. If I can help in any way I can then I will.”<br />

She said Mr McNish was affected by what he saw during his almost 12 years in the force.

Commissioner Graham Ashton said he wanted the force to do everything to protect, promote and preserve employees’ wellbeing.

Mr Ashton announced last month he was suffering from a fatigue-related illness and was taking sick leave.

At that time, he said he had always encouraged staff to speak up if they were struggling and to seek support as early as possible.

The Police Association, the union representing Victorian officers, said it was looking at how to encourage members facing a stigma to speak up.

The secretary Wayne Gatt said he wanted to break down culture that stopped police from seeking help.

“The stress that builds up over a long and challenging career makes for the perfect environment for mental health injuries to take hold,” he said.

The Victorian Police has also been strengthening its support services that are available to our members and has the Police Association in terms of physical resources and people we can send out to assist members when they need help.”

Wayne Gatt said some members had taken their own lives this year.

“I’ve been to two funerals this year of members who have lost their lives,” he said.

“It’s so critically important that we have adequate ways of providing appropriate diagnosis, delivering appropriate support services and getting help to members as soon as they put their hand up,” he said.

Mrs McNish acknowledged Victoria Police had some focus on mental health but she said she was unsure if it was on the right path.

“For me, I don’t think counselling and psychology is the only answer,” she said.

“I think there is more than one avenue that can be taken with regard to mental health,” Mrs McNish said.

“I look at natural therapies because that’s where I’ve got the main healing and benefits for me,” she said.

She said she just wanted acknowledgement from Victoria Police.

“I think they need to speak with widows and families who have lost and find if there are some common threads in there that we can pull together … so changes can be made in the right direction because like I said, it’s not a one-size-fits-all scenario,” she said.

“The counselling side of things and the support that is there, is really only just ticking the boxes,” she said.

She said conversations about suicide were becoming more widespread but there was still work to be done.

“I’ve seen people shy away from me,” Mrs McNish said.

“Even friends of 10 years have crossed the street who are work colleagues of Ray’s, you know that’s disappointing,” she said.

“I don’t want to normalise it, I just want to open the doors so that the conversations can flow and people can be understood,” she said.

“That’s been a real difficult thing for me to understand that people don’t want to or are not prepared to talk about it,” Mrs McNish. “The more we get it out there, it just makes it easier for people,” she said.

“Sadly I’m not going to be the last one that goes through this,” Mrs McNish said.

“If you can’t open up to people and for them to at least hear you out, it makes it really difficult to move forward,” she said.

Victoria Police said in recent years, it had completed an organisation-wide mental health review and done significant work to improve the culture and support services around mental health.