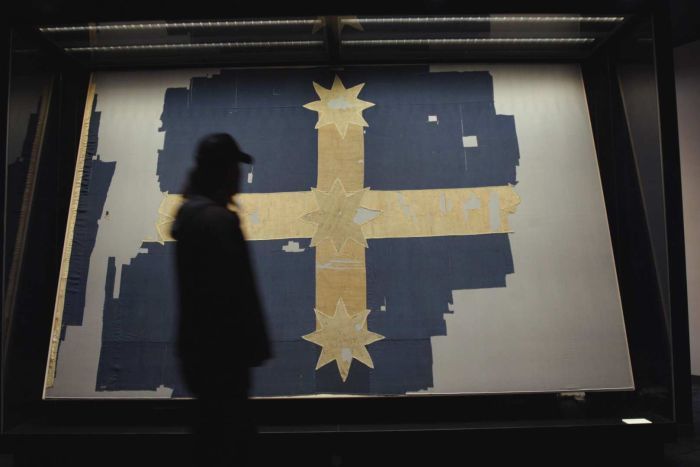 The tattered and torn Eureka flag is on show in Ballarat. Photo: ABC/Supplied: Barefoot Communications

The Victorian Trades Hall Council has confirmed it has bought a fragment of the original Eureka flag at a Melbourne auction house.

The Prussian blue flag remnant, which is smaller than an envelope, was sold for $26,000 on Monday.

“It’s not very long, it’s not very big; it’s a snippet of the flag, but we think it looks amazing,” council secretary Luke Hilakari said.

“It’s something that doesn’t belong in a private collection. This is an artefact that’s not only important to Australians, [but] Victorians and particularly the people of Ballarat.”

The Eureka flag itself was flown during the famous 1854 rebellion in Ballarat, when goldminers rose up against colonial authorities to fight against an unfair licensing system.

First hoisted at a Bakery Hill meeting between rebels, where mining and storekeeping licences were burned on a bonfire and diggers swore to defend unlicensed miners by force, it was used to attract attention and rally numbers.

“The flag itself was of course only flown for about two or three days, and after the battle probably pieces were torn off it,” said Val D’Angri, a descendant Anastasia Withers, one of the women who was believed to have helped sew the flag.

“It sort of helps to verify that the flag is old, and I know it by the look of the cotton fabric in the cross and the stars that have had a bit of a battering over the years.”

“Cotton of course doesn’t last forever, so that’s the weakness of the flag.”

Trooper John King is reported to have retained the flag following the battle. It was kept in his family and finally lent to the Ballarat Fine Art Gallery in 1895.

About 30 per cent of it was lost in the years between, when pieces were cut off and given to visiting dignitaries.

Connection with the past

Mr Hilakari started a campaign online late last week to raise funds to bid for the flag, after its Ballarat owner decided to sell the small remnant at auction.

“Such an important artefact shouldn’t only be able to be seen by a few people,” he said.

“And when you see an object like this, there’s some connection between you and the past. You can in some way, in some sense, feel some of that spirit of resistance.

“If it’s tucked away in someone’s drawer, you’ll never get that experience.”

Mr Hilakari said it was not the intention of the council to keep the fragment locked up in the city.

“There are some good reasons why it should go on tour, so that other people can see it around the state, and it should at some stage spend some time at the Ballarat Trades and Labour Council.”

Ms D’Angri said she was not bothered that the Trades Hall Council had bought the flag remnant, but it did make her sad to see its pieces separated out and sold off.

“Since that is part of what they work for, for democracy, so I suppose they feel they’ve got a little bit of the real thing from 1854, so good luck to them,” she said.

“It would be lovely instead of people hanging onto them and nobody ever knowing, it’d be nice to have them displayed with it.

“Perhaps the trades hall might even let the museum have it on an occasion.”

What is left of the original flag is now on display at the Museum of Australian Democracy at Eureka, and deemed a National Trust icon and an object of state heritage significance.

“As long as the flag is kept in one piece we’d be very thrilled,” Ms D’Angri said.