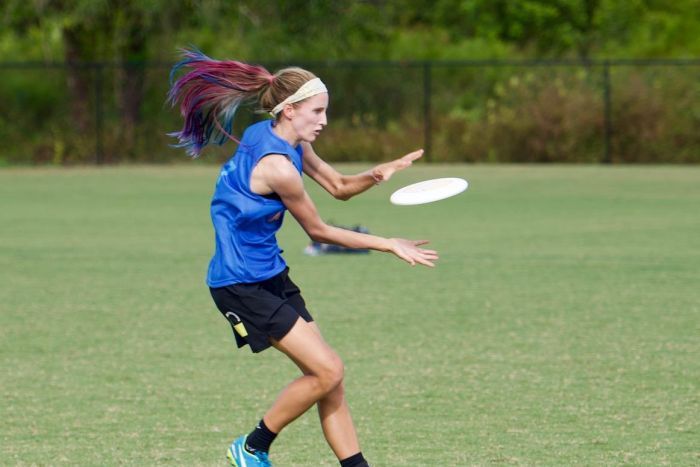 Melbourne’s Michelle Phillips is one of Australia’s elite athletes. She’s represented Australia internationally numerous times, and last year she was the captain of an Australian team. But you probably haven’t heard of her.

That’s because she plays ultimate frisbee, a sport which started in America in the late 1960s but still isn’t that well known.

Ultimate frisbee, or ultimate as it’s often called, is a fast-paced, seven-on-seven game played with a plastic disc – the kind you might have thrown around on the beach.

It’s played mixed-gendered at the highest level of the sport, and you score by catching the frisbee in your end zone.

Most importantly, the sport is self-refereed, even when played at international tournaments like the world championships.

Players call their own fouls, and any disputes on field are resolved by those involved.

Phillips discovered ultimate frisbee in 2006, during her first year of university, and says she became entirely devoted to it after embracing its sense of community.

“In the early days, I played a lot of social tournaments, and within a few months of playing, I had friends all over Australia,” she says.

“As I kept playing, the thing that really started to mean more to me was the spirit of the game – which is the whole nature of the sport being self-refereed.

“As a player, you not only call your own fouls, but at a basic level you’re responsible for upholding the rules and for playing in a way that shows high sportsmanship.

“It was just mind-blowing to be in a sport where that is the culture.”

Her father Rod Phillips says it was clear from the beginning that his daughter was very committed to ultimate frisbee.

“Michelle takes most things quite seriously, whether it be learning to ride a motorbike, learning to speak Arabic, skydiving, or raising bees,” he says.

“She had a natural talent for frisbee — she’s fast, she’s very athletic; she’s got an amazing vertical leap and she’s an exquisitely good judge of where the disc is going.”

Just two years after discovering ultimate frisbee, Michelle made it onto the Australian women’s team. In the years since, she’s played in the UK, Japan, America, Italy, the Philippines. Colombia, Singapore, the Czech Republic and Canada.

She coaches the Australian Under-24 Women’s team, trains several junior players, is setting up a women’s coaching development program, and is working with Cambodia’s first women’s frisbee team.

If that weren’t enough, she also has a day job as a manuscript editor.

Unlike athletes representing Australia in more conventional sports, ultimate players have to pay their own way — footing the bill to travel interstate for training camps, and overseas for international tournaments like the World Games.

“As soon as I started playing world’s campaigns, it became a lot harder,” Phillips says.

“A world’s campaign could cost us as individual players anywhere between $4000 and $10,000, depending on the number of training camps and how long the campaign was.”

In 2015, when the Australian Football League tested 150 female athletes from a range of different sports, all three of the ultimate players invited to attend ranked in the top 10.

But not everyone takes you seriously when you say you’re an elite frisbee player.

“It’s a real challenge, both for female athletes and for athletes playing ultimate,” Phillips says.

“The external community doesn’t necessarily respect the sport that much, and it’s easy to carry that and then not feel like you’re an athlete.”

She says she just ignores comments that ultimate frisbee isn’t a real sport, or that it’s not important enough to be in the Olympics.

“It’s actually quite arbitrary why we consider some sports real sports and others not,” she says.

“Most of the time it comes down to how long that sport has existed.

“In both cases, you’re moving objects around with your body, working together as a team, running and being physical, and that’s what the sport is.”

While some people might question how much time and energy Phillips has poured into ultimate frisbee over the years, she says she has learnt so much from the unusual sport.

“It has been a huge part of my life that I’ve devoted to ultimate and devoted to it as my single focus,” she says.

“But I don’t think that I’ve wasted 11 years of my life playing sport. I was very shy when I started playing.

“Nowadays I would confidently coach a clinic with five participants or 500 participants — it doesn’t faze me at all; I’ve grown so much as a person because of sport and because of being a leader in sport.”