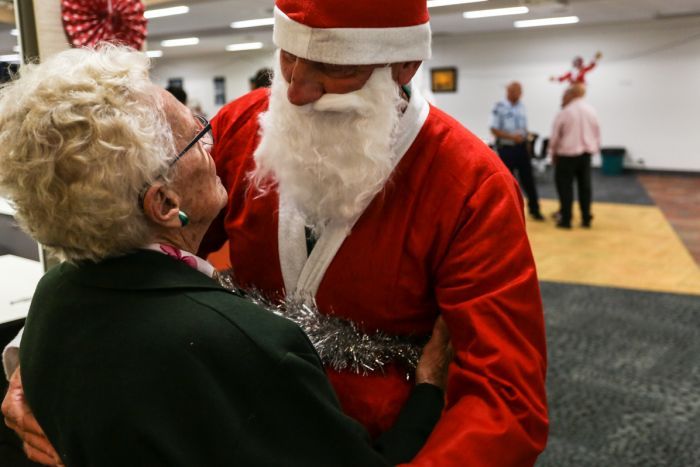 'Santa' David greets a pensioner at the prison. He's in the final year of his sentence. Photo: ABC

Christmas lunch in prison would not be an attractive prospect for most, but there is one group of pensioners who consider it a treat not to be missed.

For the past 18 years, Loddon and now Middleton Prison at Castlemaine in central Victoria has been serving up its annual Christmas lunch to the local senior citizens, many of whom find Christmas a lonely occasion.

Prisoner David (not his real name), who is Santa for the event, relishes his role and said he found it rewarding.

“It’s just nice to see a smile on the old people’s faces,” he said.

Serving the final year of an eight-year sentence, he said not enough was done to support senior citizens.

“I don’t think we give enough credence to our older people in society nowadays and I think it’s very important that we do that and recognise them for their contribution to everything.”

He is one of 17 prisoners who volunteered their time for the lunch recently.

The popular wait-listed event was hosted by 10 prisoners dressed in white shirts, complete with bowties, and included an MC and David as Santa. Others helped in the kitchen.

“It’s the one day of the year where they can feel normal, they mix with the senior citizens and it gives them some sort of normality back into their lives,” Brian Smith, catering supervisor at Middleton Prison, said of the prisoners

“It’s just a really good feel day for everyone involved.”

The loneliness of Christmas

Widow Joyce Wilson, who has attended the event for the past four years, said she “thoroughly” enjoyed it as it made her feel like part of the community as she had spent a few Christmas Days alone.

“I don’t mind being by myself too though,” she said.

Joyce Wilson sitting down for lunch as a prisoner serves her, her meal.

Barbara Templar, secretary and vice president of the Castlemaine RSL has attended the event for the past 10 years and said she loved the community spirit and the “wonderful boys”.

“There are a lot of families that don’t support their elderly,” Ms Templar said.

Whilst Ms Templar acknowledged the loneliness experienced by many seniors at Christmas she said they were not alone and the event was about “supporting one another”.

“You find a lot of these people, their families go away and don’t worry about them, just locked behind a door – it’s not fair,” she said.

Like many of the other prisoners, David said Christmas was a difficult time as there were no visits allowed and the prison was in early lockdown so that staff could be with their families.

“The first thing that comes into your mind over Christmas is your family,” David said.

Imprisoned for financial embezzlement, the 53-year-old, with a young child and grandchildren, said he would miss his family.

“Christmas is probably the saddest time of the year to be in jail.”

Ms Templar said she was not concerned about being served by prisoners or their crime.

“You do the crime you pay the time,” she said.

They’re no different to anybody else, they’re trying to do the right thing and they’re serving. Everyone that I’ve met so far has been very, very nice and very polite.”

The lunch happens thanks to donations from local businesses who supply all the food and drink.

The entree of vegetable chicken soup, main meal of turkey, pork and beef roll with roast pumpkin and baked potatoes and peas followed by dessert was prepared by a handful of men next-door at Loddon Prison.

Thirty-two-year-old Nick, not his real name, was part of a team of four who volunteered their time to prepare and cook the meal.

Half way through a minimum sentence of 22 years for aiding and abetting a murder and commercial trafficking of drugs, Nick said volunteering for the community lunch gave him time off from his everyday life in prison.

“It changes our perspective of life – on the things we’ve done in the past,” he said.

“You go through stages and after a while you get to a stage where you do make those changes and you do try to improve yourself.”