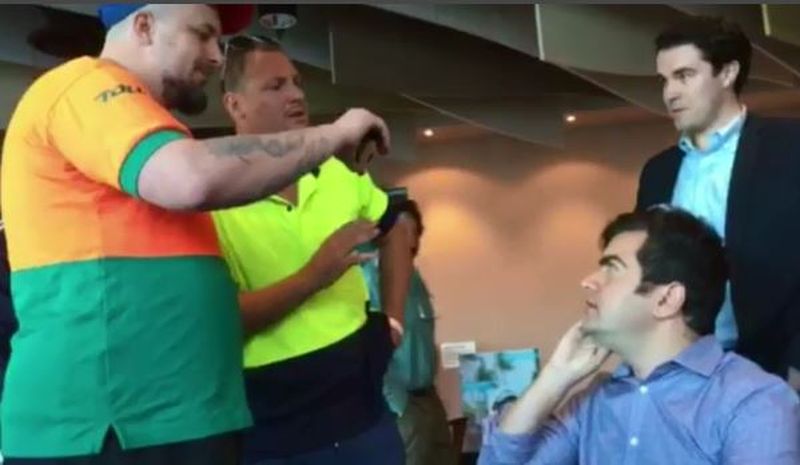 Neil Erikson, dressed in the Toll shirt, was one of a group of men who ambushed senator Sam Dastyari Photo: YouTube

A Melbourne court has ordered a far-right activist to return his uniform to his former employer, transport company Toll, which claims he is costing them business.

Neil Erikson was sacked by the company two years ago but has been captured on video wearing the Toll uniform during controversial incidents including when he ambushed senator Sam Dastyari in a Melbourne pub.

Lawyers for Toll lodged an urgent injunction in the Federal Circuit Court to force Mr Erikson to return the uniform and stop damaging the company’s image.

The court heard on Thursday the company had sent Mr Erikson a letter last month demanding he return the uniform after the incident involving Senator Dastyari.

Barrister Martin Garrett told the hearing that despite assurances he would return it, he had instead begun lending it to a friend and fellow far-right activist, Ricky Turner.

On Tuesday, that man was pictured on the front page of the Herald Sun newspaper wearing the Toll shirt as he raised his fist at a left-wing activist during a clash outside the venue where controversial British commentator Milo Yiannopoulos was speaking.

Mr Garrett said it appeared they believed wearing the uniform gave them a higher profile.

“In addition to giving the uniform to Mr Turner, Mr Erikson has continued to make videos that appear on social media where he in effect taunts Toll in various ways,” he told the court.

Mr Erikson was fired from the company in 2015, after not showing up to work for three weeks, while he was facing court of stalking charges.

The court was told Mr Erikson’s behaviour appeared to be escalating.

Mr Garrett said some of Toll’s customers had written to the company to complain about Mr Erikson who they believed was still an employee.

The court heard one had told the company it would pull $45,000 of its business, explaining they had used Toll for 18 years but “cannot condone a business that harbours racists”.

Judge Suzanne Jones ordered Mr Erikson to return his uniform within seven days and stop causing damage to the company.

The activist did not appear in court at the hearing despite being notified of the urgent legal action on Wednesday.

It was told he responded to an email at 1am on the day of the hearing, informing Toll’s lawyers he would not be coming as he had not had time to engage a lawyer.