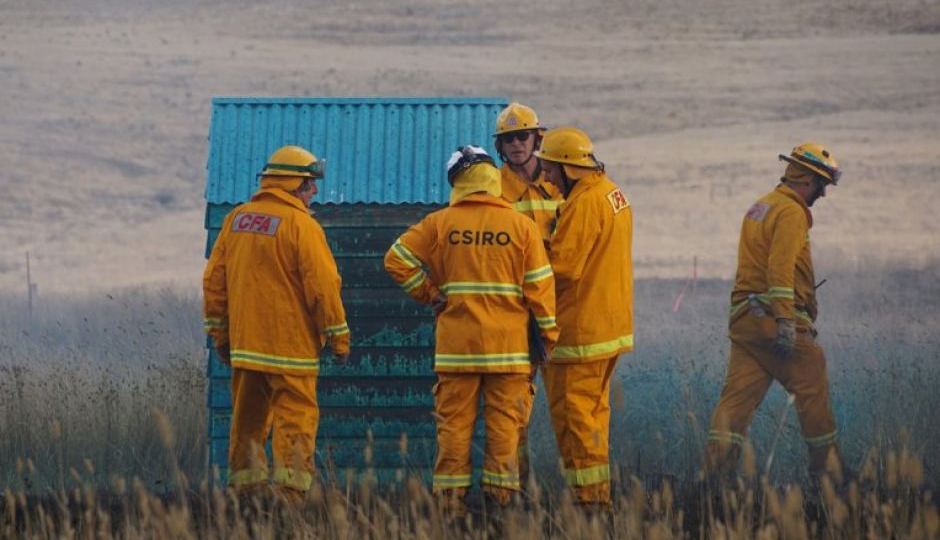 You may well be able to fight fire with fire, but Victoria’s Country Fire Authority (CFA) thinks you might also be able to combat it with “slimy” and “messy” polymer gel.

The CFA’s bushfire research team, together with the CSIRO, is trialling whether the commercially available substance can help stop grassfires.

CFA bushfire research and development manager David Nichols said the “gluey” gel was recently tested in three scenarios and some of the initial findings were positive.

In the first test, the gel, which had been mixed with coloured food dye to make it easier to see the test zone, was applied to the ground in front of a grassfire to create a control line.

The second test involved painting the gel onto a weatherboard structure creating a protective layer about three to five millimetres thick.

The final test saw the gel mixed with water and sprayed onto grassfires from a tanker flanking the edge of the flames, while a second tanker attacked the fire from the other side with just water.

“The gel did penetrate the grass surfaces,” Mr Nichols said.

“You could still see the gel on the ground as the fire front hit the gels and went over the top of it.”

The other two tests were much more promising.

“As far as the indirect attack, when we applied it to the two weatherboard structures we found that was more effective. It actually protected the surface very well,” Mr Nichols said.

“You could see a bit of charring as the fire burnt around it.”

In the direct attack from a tanker, the gel performed marginally better than just using water.

“We could see where the gel actually hit the surface and suppressed the fire. You could see it was a little bit more effective in putting out the fire than the water,” Mr Nichols said.

“Using the water-enhancing products like a gel or a foam product … is something we want to get an upper hand on.

“It enhances the capabilities of the water to go further because we’re limited in the amount of water we have on our vehicles.”

“Any tool like that we can use helps make us better off.”

The next stage of the research will involve further testing in a controlled laboratory setting which will make it easier to maintain uniform environmental conditions across all experiments.

One of the problems with conducting field experiments is you rely on Mother Nature to play ball, and a simple wind change can muddy your results.

The research is expected to continue next year.