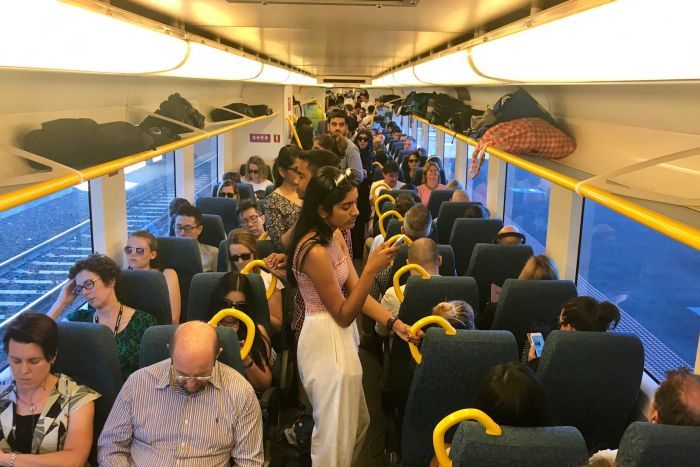 Many of Victoria’s V/Line train services are overcrowded and at capacity before they have even reached their busiest stations, just two years after a multi-billion-dollar upgrade to the state’s Regional Rail Link.

In 2015 $3.65 billion was spent on building 90 kilometres of track between West Werribee and Southern Cross station in Melbourne’s CBD to service an extra 54,000 people a day travelling from Melbourne’s booming west.

In April this year $1.45 billion was dedicated to speeding up services in the Bendigo, Ballarat and Gippsland regions, including $110 million to establish a new Surf Coast rail project to Torquay, while 151 new services were added across the state in August.

But that has not made life easier for Chris Saunders, who has been commuting from Geelong to Southern Cross for 25 years.

He said the service is not what people would expect given the amount of money that has been spent on rolling out the new fleet of trains.

“It’s uncomfortable and it’s often delayed – any cancellations, any delays have a flow-on effect throughout the day,” he said.

Most people are unhappy and uncomfortable. It’s too cramped, too crowded.”

Mr Saunders said the attraction of being able to get work done on the trains, which are designed for longer-haul travel, was no longer a reality.

He said the new V/Locity trains also struggled with the internet.

“It’s just a commute and sometimes it feels a bit like a cattle truck,” he said.

V/Line statistics showed eight morning peak services on the Geelong line were at 100 per cent capacity before they had reached the busiest stations – the growth suburbs of Tarneit and Wyndham Vale on Melbourne’s fringe.

Even though there are 445 seats on the Waurn Ponds service to Melbourne that leaves at 6:48am, it is at capacity by Tarneit.

In Ballarat, three morning peak services are full before they reach Caroline Springs and Deer Park.

Many afternoon peak services are also bursting at the seams.

In a statement, V/Line chief executive James Pinder said a three-carriage train was being added to the fleet every six weeks to cater for growing demand.

“In just over two years, we’ve introduced more than 280 weekly services to the Geelong line, providing more choice for our passengers and catering for growing demand,” he said.

“The Geelong line is our busiest, which is why the Government has continued to add extra services and carriages to the line.”

Stephanie Wisely has just moved from New South Wales to Victoria and catches the train from Wyndham Vale to Southern Cross.

She is surprised how crowded it is for her morning commute.

“The 7:48am [service] is always like this. We’re like fish standing up. This is my first month or so and everyday has been like this,” she said.
“I’m standing up the whole time, I just have to sit the whole day at work.”

In August, the auditor-general found seats ran out on more than half of peak services on the Geelong line.

The Gippsland line is the worst in the state for getting customers to their destinations on time. Twenty per cent of trains did not arrive on time last month.

Reliability is also an issue, with buses often used to replace faulty trains.

More trains than ever on Geelong line: Minister

Transport Minister Jacinta Allan said the Geelong line was the busiest in the region, with 44 per cent of total trips happening on the line, and the Government was working to add more trains.

She said $110 million was being spent on studying the Wuarn Ponds area and how that line could be improved.

“I can appreciate that passengers, particularly those that are regularly passengers on the Geelong line, want to continually see improvements to their service and I share that aspiration,” she said.

“Obviously during the peak period those services are the more popular ones and we know that we’ve got some challenges in meeting the demand for those services.

“But if you look across the timetable there are more services than ever before.”

Opposition Transport spokesman David Davis said the Government had not managed the growth of the region well enough.

“The truth of the matter is that Mr Andrews admitted in 2010 that they’d failed to cope with growth, to cope with the infrastructure that’s needed,” he said.