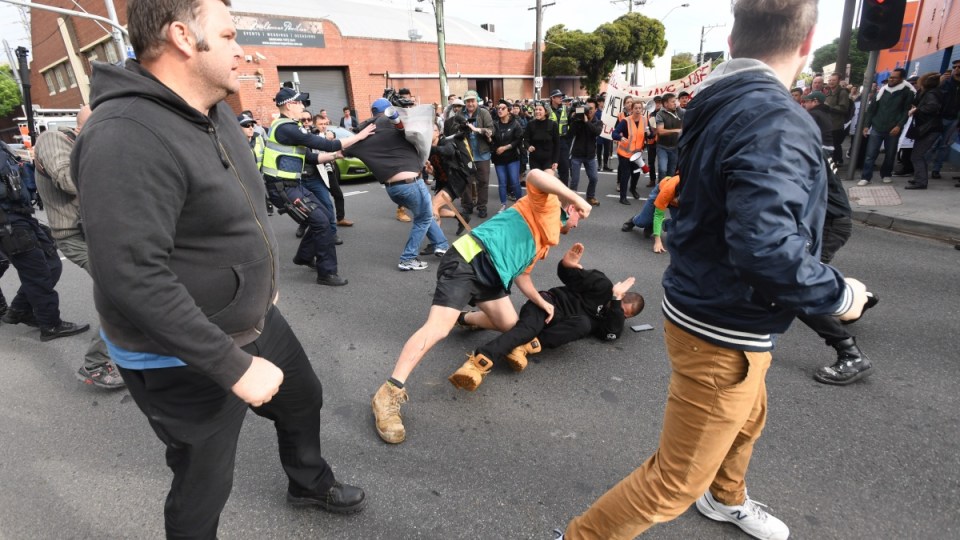 Violence broke out in Melbourne on Monday night ahead of an event for Milo Yiannopolous. Photo: AAP

Violent clashes have broken out between rival protesters in Melbourne at an event for controversial right-wing speaker Milo Yiannopoulos.

The commentator is speaking at several events in Melbourne on Monday, with a heavy police presence in place to keep attendees and protesters separate.

Hundreds of protesters from left-aligned group Campaign Against Racism and Fascism and the right-wing groups, Reclaim Australia and the True Blue Crew are rallying outside the event.

Pepper spray was used to separate two men after a fight broke out in the middle of Racecourse Road.

Chants of “f––k off Nazis” were yelled by anti-fascist groups, while supporters of the controversial commentator were waving Trump flags and wearing red “Make America Great Again” caps.

People who live in nearby housing flats have also joined the protest with anti-racism signs and some chanting about Palestinian land rights.

Rocks were thrown at a police van and the road was closed to traffic in both directions.

Public order officers have been deployed to keep the two groups away from each other.

Promoter Damien Costas said the activists were wasting taxpayer money by protesting against the event.

“Simply because his (Yiannopoulos) views are different from the status quo,” Mr Costas said.

The polarising British commentator is touring the country and is due to speak in Canberra, Sydney and the Gold Coast.

The 33-year-old resigned from conservative website Breitbart News after he seemed to suggest it was ok for older men to sleep with teenage boys.

Milo Yiannopoulos in Melbourne: Violence breaks out at clashing protests