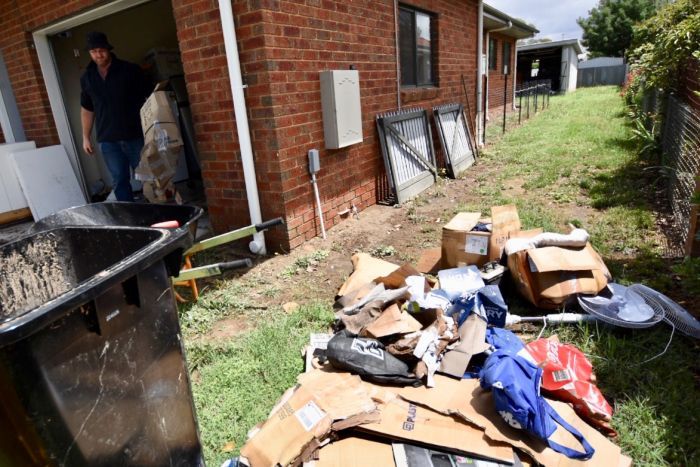 The clean up begins at Euroa. Photo: ABC

Residents of north-eastern Victoria are now cleaning up from the weekend’s record rainfalls, but forecasters are warning there may be more storms on the way for the Gippsland region from an east-coast low.

Farmers are also assessing the damage from the downpour, with cherry growers in North East Victoria particular worried about damage to what had been predicted to be a bumper crop.

In what has been a hectic period for the SES, volunteers have responded to more than 2700 requests for assistance since the storms began on Friday.

Victorian Premier Daniel Andrews said 900 of those calls were taken after 4pm on Saturday. He said the Government stood ready to provide support to those affected by the floodwaters.

“I think we’ve had something in the order of 73 homes that have had water in them, only a small number of them have had water above the floorboards, that’s up in the north-east,” he said.

“We still have concerns for a number of properties – maybe as few as 15 or 20 – in that Wangaratta area.”

Victoria’s north-east and parts of Melbourne were flooded when a summer’s worth of rain fell in one day in parts of the state. However, Melbourne escaped the worst of the storm with the Bureau of Meteorlogy defending its decision to issue dire warnings about the likely impacts.

Areas were in Northern Victoria were hardest hit, with Euroa recording about 220 millimetres of rainfall. Strathbogie Shire Mayor Amanda McClaren said there was a sense of relief the damage was not worse.

“We’ve been relatively lucky compared to what we thought was going to happen,” she said.

“With all the weather predictions that we were hearing it could have been a lot worse.”

On Saturday morning, the Euroa Caravan Park was underwater and residents were told to leave with floodwaters lapping at the doorsteps of the elevated cabins. But just 24 hours later, there was little evidence of the rain.

Up to eight properties in Euroa had some flooding, although most of the damage was not serious.

Robert Kelsall, 86, said his car floated down the street and bumped into another vehicle.

“I looked outside to see what could be done and I decided nothing could be done without getting very wet, so I went back to bed,” he said.

A few doors away, Matthew Willey lost freezers and other equipment in his garage to flood damage.

“We didn’t think it was going to be this bad,” he said. “The bloke who lives next door, he was here in the big floods of ’92 or ’93 and he said it wasn’t too bad in here, so we weren’t overly stressed.

“We woke up to find the garage full of water.”

With plenty of water in the catchments, emergency services now have their eye on low-lying parts of the town, warning there could be flooding if the two rivers peaked later on Sunday.

Melbourne had 100mm of rain on Saturday, the highest 24 hour rainfall total since 1992. Other totals included 220mm at Mount St Leonards, near Kinglake, at Stratbhogie and 210mm at Mt Donna Buang.

Flood warnings remain in place across north-east Victoria, and SES volunteers have responded to more than 2700 requests for assistance since the storms began on Friday.

There will be further showers and southerly winds across the state for the next two days but forecasters are watching another weather system predicted for Tuesday or Wednesday.

An east coast low will develop off the New South Wales coast before rapidly travelling south and bringing further heavy falls into Gippsland and far eastern Victoria, Kevin Parkyn, a forecaster with the Bureau of Meteorology, said.

“We could see falls of 50-100mm and at this stage the rainfall totals are likely to exacerbate flooding in those areas.

“But the initial modelling of this event suggests minor flooding is the most likely outcome.”

Emergency Management commissioner Craig Lapsley said the amount of water in the state’s river systems was a major problem.

“North-eastern Victoria is the focus at the moment with Ovens and King and the two creeks around Euroa, but don’t underestimate Gippsland later in the week,” he said.

“Gippsland has got six rivers currently in minor flooding and with the east-coast low that’s in the forecast could see significant more rain.

“I think the key thing here is the rain is either leaving us or has gone, but the river system has [a lot of] water in it.”

Farmer Frank Primerano is counting his blessings at Whorouly, east of Wangaratta, after the weekend’s heavy rainfall.

He said his blueberry crop escaped unscathed and harvest would proceed as planned, but the same could not be said for the cherry crop.

Before the weekend, he was looking forward to picking a bumper crop of grade-A cherries.

But now the large crop is splitting as the fruit absorbs water and bursts from its skin.

“If I was harvesting this year’s crop with last year’s weather I’d be driving around in a Bentley,” he said.

The cherry and berry losses come at a bad time for consumers planning their menus for Christmas celebrations.

“There’ll be significant damaged fruit that’ll be left in the paddocks or graded out from first quality fruit,” James Terry from the Victorian Farmers Federation, said.

Both the Yarra Valley and the north-east are significant production regions for both of those crops at this time of year. So I think we’d expect to see prices will be increased for the next three or four weeks in the lead-up to Christmas.”

While those damages are still being assessed, other farmers have welcomed the deluge.

Asparagus farmers had already harvested their crops after warm conditions in November.

“So the paddocks had been finished for the year, fertilised and the rain is perfect timing really,” Mr Terry said.

“The dairy farmers I’m sure are rejoicing after they’d had a lot of hay and silage removed and fertilised again and I’m sure they’ll have a lot of re-growth after it in South Gippsland and the western district.”

After the superstorm, Northern Victoria dries out and cleans up