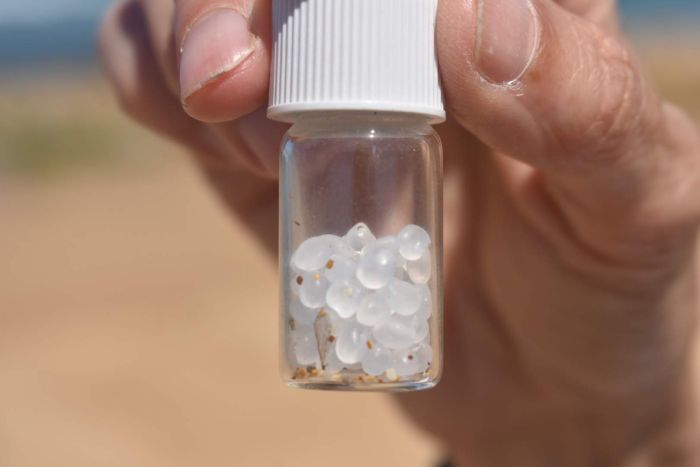 The microplastic nurdles have spread across the coast at Warrnambool. Photo: ABC

Hundreds of thousands of tiny microplastics have inundated the south-west Victorian coastline.

The spill at Warrnambool has been traced to a nearby sewage treatment facility owned and operated by Wannon Water.

It says the nurdles, commonly used for plastic manufacturing, were illegally dumped in its system, and the state’s environment watchdog is now investigating.

However, when it comes to who is responsible for the clean-up, local residents say the authorities have been far less proactive.

“It seems like none [of them] are actually taking any action,” said Colleen Hughson, who has been leading a community clean-up effort.

“Just in a three-metre square, we picked up 4500 of them [nurdles], and that was the same all the way along the beach.”

The incident is galvanising the community, with dozens of volunteers collecting sieves and buckets to remove the nurdles one by one.

But they have been left wondering why the brunt of the heavy lifting has fallen on the shoulders of locals.

The ‘nurdle outbreak’ is of concern to residents and researchers alike, due to their ability to travel from coast to coast.

“They float on the surface and get carried with the currents, [so] once a spill happens, it’s very, very hard to contain,” Julie Mondon, associate professor of environmental science at Deakin University said.

Dr Mondon is leading a study into the microplastics and is in the process of analysing those found on the shores of Warrnambool.

Her findings will allow researchers to determine the nurdles’ origin and what contaminants they may have accrued in the water or beyond.

“The spill here in Warrnambool is not an isolated case, it happens worldwide,” Dr Mondon said.

“Accidents happen, we know that, but it’s about legislation to ensure they [nurdles] can’t get into the ocean in the first place.”

‘We could have handled things differently’

Wannon Water has rejected suggestions it has been slow to respond to the spill.

Managing director Andrew Jeffers said their priority was ensuring no more nurdles were being expelled from its facility into the water.

“That was number one — making sure it didn’t get any worse, [and] that took a mighty effort from our operations personnel,” Mr Jeffers said.

The water authority said it had since removed millions of nurdles from its tanks and other infrastructure, and was now focusing resources on the beach clean-up.

“You always look back and think, could things be done differently,” Mr Jeffers said, in response to criticism from volunteers.

“And the answer is yes in some ways.

“Then again, we are quite happy in what we did in getting established quickly to stop that further contamination.”

The Environment Protection Authority is continuing to investigate the matter.