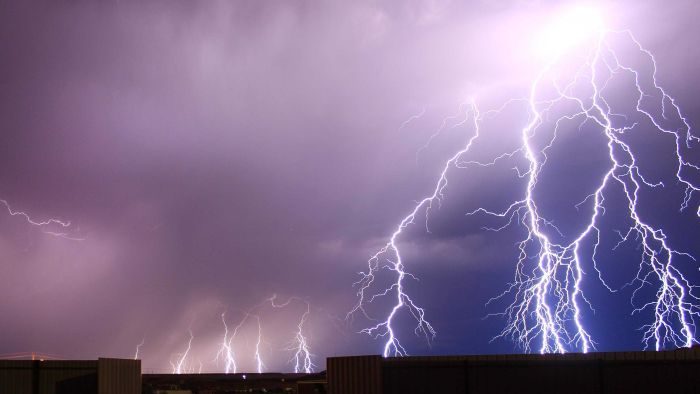 Be prepared: A huge rainstorm is heading our way. Photo: AAP

There’s growing concern that the massive rainstorm heading across Victoria will endanger lives, ruin crops and cause millions of dollars in flood damage.

Victorians in both the city and regional areas are being warned to brace for what is tipped to be the most significant rain event in more than a decade.

The Bureau of Meteorology’s severe rain warning was supported in parliament on Thursday by Victorian Premier Daniel Andrews who urged the public to stay safe and heed advice from authorities in the coming days.

“This is an event of absolute massive scale,” senior meteorologist Scott Williams said. “It is an event that poses a threat to life. There will be a massive amount of lightning, there will be roads cut and flood waters.”

This event will turn farms into lakes with such rapid rain rates.”

Mr Williams said thunderstorms developing over western Victoria on Thursday night would move to other parts overnight and into Friday.

“This is a vast, intense, high-impact event for this state.”

The biggest concern was for the north-east of the state, with “huge” amounts of rainfall to peak there on Saturday.

“It’s not just 300mm at the top of the mountains, it’s 300mm possible anywhere from Wangaratta to Hotham Heights,” Mr Williams warned.

“It’ll be over more quickly in the west, the Mallee and those areas, the main impacts [there] will be the thunderstorms, so the rain total out there will probably be generally 50mm to 100mm. There may be some local 200mm falls.

“As you go further east in the northern country towards Bendigo and down towards Ballarat, it’s much more likely that Friday night they’ll see 150mm to 200mm — heavy thunderstorm activity.”

Melbourne hit Friday and into Saturday.

“Melbourne will see at the very least 50mm to 100mm. The surrounding hills, the catchments of the Yarra and Maribyrnong river probably more like 100mm to 150mm on Friday night,” he said.

Winds will pick up on Saturday night, and Gippsland will be the last to be hit by the rain. Some eastern parts may see 100mm rain on Sunday, but it was too early to give an accurate forecast.

“In Melbourne on Sunday morning we could get another burst of 50mm, 60mm-plus of rain, that could coincide potentially with floodwaters from the the night before coming down the Yarra and Maribyrnong,” Mr Williams said.

“If we’re going to get gale-force south-westerly winds, a high tide, 150mm of rain in Melbourne over two days — that’s three times the December average — we’re going to have massive flooding.”

“So we’re going to have major, major, major flooding problems right around this state, probably many roads cut … I suspect [infrastructure] will be impacted as badly as most of us have ever seen.”

Have an emergency plan

State and local emergency control centres have been activated as emergency services work on a four-day plan to cope with possible flash flooding.

“This is a very serious matter, and one that will pose a real challenge to communities right across the state and will be a direct challenge to public safety,” Mr Andrews said.

rain event of this forecasted magnitude hasn’t been seen in metropolitan Melbourne since 2005 and in regional Victoria since 2010, SES deputy chief Tim Wiebusch told reporters.

It only takes 15cm of water for a car to float and people should not attempt to drive through floodwaters, he added.

People are being warned not to become complacent if the rains haven’t hit by Friday morning, with Mr Williams adding: “They didn’t think the Titanic would sink, but it did two hours later”.

The low-pressure system may dump more than 300mm of rain in Victoria’s northeast and up to 200mm over Melbourne.

That’s the equivalent of two to three times the monthly average in two days.

Some farmers have worked throughout the night, frantically harvesting their crops before the deluge arrives.

“For many people it might be an inconvenience, but for agriculture with the timing of crops being harvested, fruits being developed and the humidity that follows big rain events, it is going to be challenging,” president of the Victorian Farmers Federation President David Jochinke told radio 3AW.

“Most guys are working through the night to get as much crop as they can off, but it’s very hard to cover your whole ground in a couple of days, it usually takes weeks,” he said.

Agriculture Minister Jaala Pulford said the rain could be financially disastrous for many farmers, who have put their heart, soul and money into their farms.

Stone fruits were yet to be picked but the rain risks the quality and quantity of the crops, said Fruit Growers Victoria chairman Gary Godwill.

“For them, this rain will be diabolical. And (the crops) were quite good, especially because NSW didn’t get a lot of rain,” he said.

A flood watch has been issued for rivers across the state, including Melbourne’s Yarra, with widespread flooding likely from Friday onward.

City dwellers are also being put on high alert for flash flooding, which is likely to occur too quickly for warnings to be put out, Emergency Management Victoria said.

Massive rainstorm set to cause flooding, crop damage across Victoria