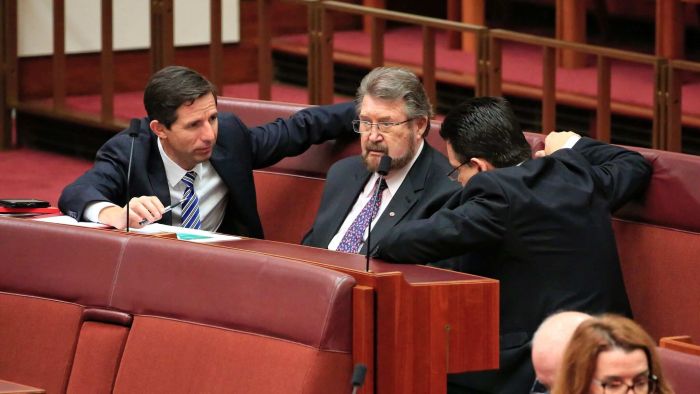 Senator Hinch moved a motion in the Senate on Thursday, praising the Victorian parliament for passing assisted-dying euthanasia legislation on Wednesday.

“Who are you to tell me that I cannot voluntarily end my suffering if my body is racked with pain and a relentless terminal illness?” Senator Hinch asked parliament on Thursday.

The long-time voluntary euthanasia advocate said he believed in people’s right to say “enough is enough” by ending their own life.

He is calling on all states to follow suit with Victoria and the federal parliament to respect the wishes of Australians “with regards to dying with dignity”.

“I believe fundamentally that every human life is special. It should be protected and no one including any individual should have the right to destroy life,” Senator Canavan said.

Labor’s Anne Urquhart said opposition senators would be given a conscience vote on the motion, but it was largely a matter for state and territory governments.

Liberal Democrats senator David Leyonhjelm said people should not be doomed to live out their days in pain and helplessness.

“As a veterinarian I have often made the decision to put an animal to sleep because animals are not people and cannot give consent,” Senator Leyonhjelm said.

“However, for us humans even when we give consent and beg for help the law prohibits the same compassion.”

Queensland LNP senator Barry O’Sullivan said he was opposed to humans or the state being involved in any action which caused death.

He said his wife died after life support systems were turned off following an aneurysm, showing humane approaches in palliative care.

“In extreme cases our society is also, in effect, through the withdrawal of medical care or continued medical care, allowing people to die with dignity,” Senator O’Sullivan said.

Debate on Senator Hinch’s motion has been adjourned.