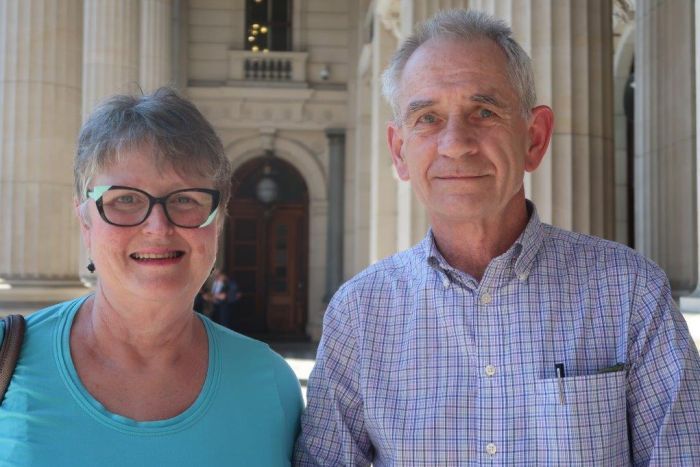 Victorians will have the right to request a lethal drug to end their lives from mid-2019, but the new legislation will likely come too late for Jen Barnes.

After more than 100 hours of debate across both houses of Parliament and two demanding all-night sittings, Lower House MPs on Wednesday ratified the amended bills, which will now be sent for Royal assent.

Premier Daniel Andrews, who came to support euthanasia after the death of his father last year, said it was an historic day.

“This is a day of reform, a day of compassion, a day of giving control to those who are terminally ill,” he said.

Barnes has just been told the blob-like tumour on her brain is growing, inoperable and will ultimately rob her of life.

But with the little time she has left, she and her husband Ken have, for months, been regularly making the four-hour round trip to the Victorian Parliament from their home on the coast to watch politicians debate the new legislation.

Ms Barnes was overjoyed when the legislation cleared its final hurdle.

“It’s unlikely that I would see it come through for me because I’m not likely to be here in 18 months’ time,” she said.

“But for the future, I think it’s the right way to go.

“I mean they always said that it’s only going to affect a small number of people but for those people I think it’s important that it’s there.”

While some patients rejoiced over the legislation passing, doctors met the news with unease.

“I think anyone that’s facing the end of their life is vulnerable,” he told 7.30.

When you consider more vulnerable people, those who are coming from non-English speaking backgrounds or Aboriginal or Torres Strait Island backgrounds, I think again there will be a whole raft of concerns that will be difficult for the legislation to be explained and understood by those people.”

He won’t have to go against his beliefs because earlier this year his employer, Catholic organisation St Vincent’s Health, announced it would ban its staff from taking part in voluntary assisted dying if it was legalised.

But Dr Boughey said it was still a bad day for patient choice.

“My biggest concern is that people will see the progression from illness and disease treatment, the next step will be assisted dying,” he said.

“They won’t get the benefit of engagement and referral to palliative care.

“My other concern is that they will feel a burden within their home and their family and therefore that’s an alternative that they’ll feel pressured to consider.”

‘None of us get out of this life alive’

Ms Barnes believes the concerns about coercion and pressure are unfounded, given the dozens of safeguards in the legislation.

Her husband is also on board.

“There’s no argument, we’re all on the same page,” Mr Barnes said. “Death is death, it’s part of life, it’s the dying bit that’s the problem.

“This is the most practical and humane decision for all of us.”

As he sits with his wife back at their Inverloch home, the pair are flicking through funeral brochures over a cup of tea.

“So this is where we’ll both finish up. You go there first and let me know what it’s like,” Mr Barnes joked.

Ms Barnes isn’t sure she would take up voluntary assisted dying even if she does live until the law is implemented, but she’s already decided where she wants to end up.

“I’m going to a place called Mount Elephant, and you get buried standing up and hawks fly around there and they plant a native tree there,” she said.

“It’s the cheapest funeral you can have and I thought, ‘That’ll do me’.”