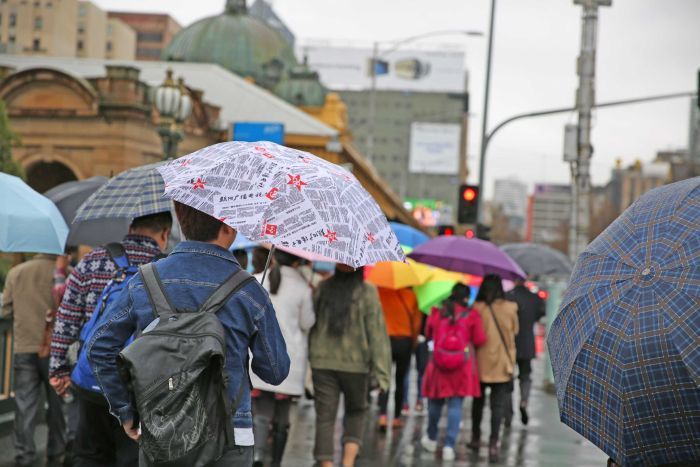 The big wet cometh: Victorians have been urged to prepare. Photo: ABC

Victoria is set to be drenched with up to three times its monthly rainfall average over two days with “unprecedented” thunderstorms due to hit the state on Friday and Saturday, which could lead to flash flooding.

The Bureau of Meteorology has issued a severe weather warning with heavy rain and thunderstorms forecast to move across the state from the west from Thursday night.

Senior forecaster Scott Williams said the heaviest storms were set to hit Melbourne and the state’s north-east late on Friday night and into the early hours of Saturday.

“I don’t think I’ve ever seen such a deep low form over Victoria whilst we’ve got this moisture around,” he said.

“So to that extent we are a little bit in unchartered territory in terms of the weather.

“This is a very big event, a very widescale event and it’s right at the top end of rainfalls that we’ve seen in Victoria in the last 30 years.”

Mr Williams said there could be rainfall of up to 300 millimetres in the state’s north-east ranges.

He said thunderstorms were common in November, but not on this scale.

“November traditionally is a thundery time. It’s our peak season for thunderstorms and we do get heavy rain but I’m talking heavy rain as 50, 60 maybe 100 millimetres,” Mr Williams said.

When you’re talking 150, up to 300, millimetres on the ranges, that makes it unprecedented.”

Mr Williams said it was like “a switch was flicked” after a cold and wet Melbourne Cup day.

He said since then Melbourne had experienced a record number of days over 30 degrees.

“Not only is it warm, it’s humid so the ingredients for this coming rain event is tropical moisture that’s been pumped down across eastern Australia by north-easterly winds day after day for about two weeks,” Mr Williams said.

Mr Williams also had a warning for farmers harvesting crops: “get it up and get it high.”

People have been warned to pay attention to storm warnings over the coming days.

“You don’t know what’s mixing in those floodwaters … and in particular we don’t want to see people driving into flash floodwaters,” he said.

“It only takes 15 centimetres to float a small car and see that end up in danger.”

Victorians urged to prepare for the big wet