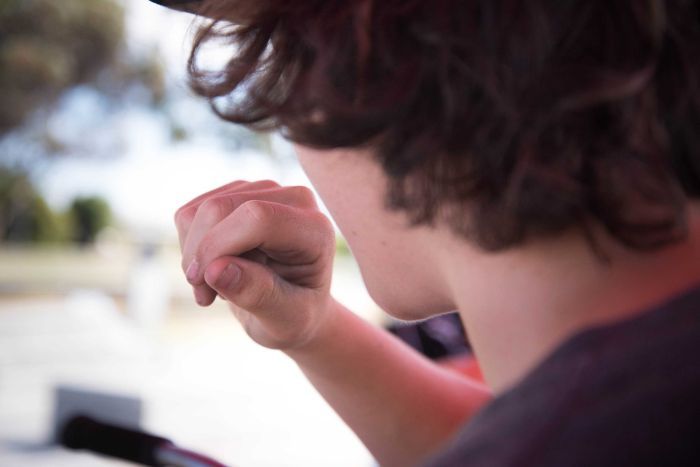 Jack [not his real name], 16, has stopped going to school. Photo: ABC

Victorian authorities are rolling out new laws and flexible school programs in a bid to get teenagers off the streets and out of court rooms.

The changes recognise rehabilitation as the best way to re-engage troubled youth.

A phone call home would not mean much to couch-surfing teen Jack [not his real name], who has no contact with his parents.

It might be against the law for young people aged between six and 17 to skip school, but authorities are realising discipline is not always the answer.

Jack should be attending Horsham College in regional Victoria but, for now, has completely disengaged.

When a new principal took over four years ago, one in five students was disengaged and enrolled in alternative programs.

For an equal number of students – about 20 per cent of the 880 enrolled – both parents were unemployed.

Last year there were 20 teenage mothers; this year there are 12. There are 17 students in out-of-home care.

“I just live in the lounge room,” Jack said of a house with four other young men.

Teenagers at the Horsham skate park told the ABC sex and drug use started at the age of 11.

Jack was using drugs and engaging in other criminal activity at 11, but has since found a new group of friends.

“One of my old mates got me back into riding [scooters],” he said.

“Riding’s the thing what stopped, basically, me doing drugs and all that.”

It is typical of a regional Australian community where drugs, teenage pregnancy, homelessness and family breakdowns are causing young people to drop out of the education system.

The further a school is from a city centre, the worse the attendance rates. Nationally more than one in five students will miss at least 10 per cent of the school year.

In regional areas it is one in four students. In remote Australia, it is more than one in three.

Victoria is in the process of rolling out the new laws that will see courts interact directly with schools.

As of June, magistrates will be able to hand out youth control orders, with mandatory requirements that a young criminal attend school or training.

The orders will also force young people to engage with other rehabilitative services such as drug and alcohol counselling.

“Youth parole board figures say that 56 per cent of young offenders who have been in detention have been previously expelled or suspended from school,” she said.

“The research and evidence tells us they are far more likely to grow out of offending with the right intervention and support at the earliest possible point.”

“We’ve got to start by having a more sophisticated conversation, not demonising young people or working from a position of fear,” she said.

“Safety doesn’t come from locking kids up. Safety comes from actually teaching them that there’s another way and then giving them an opportunity to be law-abiding citizens.”

“When you think about it, if you’ve got nothing to aspire to, life takes on a completely different colour,” he said.

“That’s one of the characteristics of people who generally get involved in criminal behaviour – the long-term view gets pushed aside.”

Mr Stratmann said young people needed to be “initiated into the culture” before they would be inspired to contribute.

“The first place we do that is through educational facilities — schools, primary schools and secondary schools,” he said.

Welfare and intervention needed, not teachers

When principal Robert Pyers took over Horsham College four years ago, he decided to spend the funding in a new way.

“We could have added extra teaching staff, [but] what we’ve done is added extra expertise in intervention, in social work [and] in welfare,” he said. “The students who we were seeing not engaging were ones who had issues in those areas and needed support to be able to re-engage and keep within the system.”

Alternative programs assistant principal Adam Ross said the number one factor when it came to truancy was a lack of “parental push”.

“There is drug use in the community for some of these kids and sometimes that’s at home.

“The more we can get them to school and show them the pathway, we’re making a difference.”

Horsham College is seeing results. In the past year there has been a 14 per cent increase in attendance among students in the alternative programs.

“From a program that’s somewhat hidden away, we’re actually starting to now celebrate because it’s something we take a lot of pride in,” Mr Pyers said.

“In our parent opinion survey, general satisfaction was single figures in 2014; it sits at 89 per cent at this stage.”