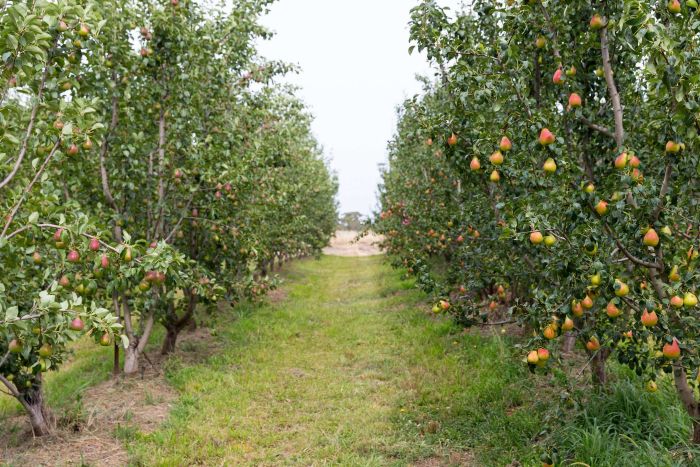 Pink is the new green in Australian pears, with two new blush pear varieties set to bring a splash of pink to Australian supermarkets as early as next year.

The trademark Lanya and Deliza varieties took years to develop, and were recently tested by consumers in Asia.

Bruce Tomkins from Agriculture Victoria commissioned the research and said the results would make a humble pear blush.

“A buyer from one of the big supermarkets wanted to put in an order straight away, and our consumer testers asked if they could take some to show their friends,” Dr Tomkins said.

“The results are really promising. The pear industry has been in decline for years, but these new varieties could revitalise the industry and profitability.”

Since 2004, pear production in Australia has declined by 40 per cent.

Dr Tomkins said part of the reason was that Australian production was still dominated by traditional European pear varieties.

“Williams’ Bon Chretien, Packham’s Triumph and even Corellas have been grown in Australia for more than 100 years,” he said.

“Some of these varieties aren’t well suited to modern production.”

The sample fruit was grown in a test orchard in Victoria’s Goulburn Valley, an area that produces around 90 per cent of Australia’s pear crop.

It underwent extensive storage and transport testing before the consumer trials, and performed better than existing blush varieties.

Fruit has been developed naturally

Lanya and Deliza are the result of an extensive cross breeding program and not genetic modification.

“They’re the result of trialling hundreds of thousands of crosses over years and years of our pear-breeding program,” Dr Tomkins said.

“We use natural selection. Graeme McGregor, the original project leader, would have tens of thousands of seedlings and he’d spray them with the main pathogen of pears, and then he’d only grow the ones that survived.”

Kerry Stott from Agriculture Victoria has researched the cost of investment in the new pears.

She said the most profitable planting for Deliza was a density of 2222 trees per hectare.

“The annual return for low-density Packhams at full bearing is $967 per hectare, on average, and there’s a 45 per cent chance it will lose money in any one year,” Ms Stott said.

“By contrast the annualised returns for the new blushed pears, evaluated over 30 years, were in the order of $14,265 per annum.”

The first commercial crop of the new pears is expected next year.