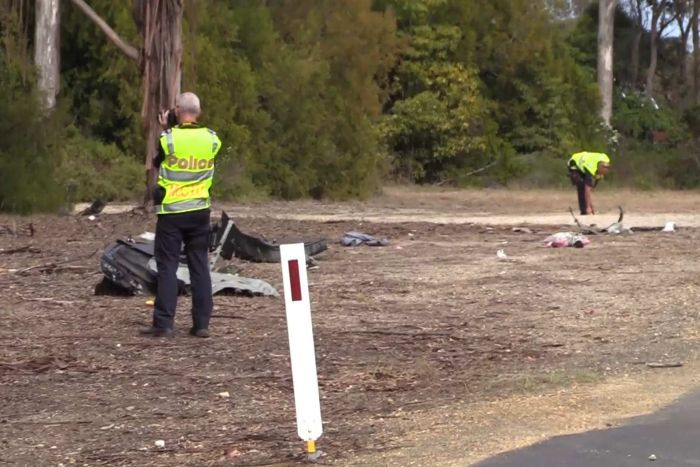 Police on the scene of a car crash in Lakes Entrance. Photo: ABC

A man has been killed in a suspected hit-and-run crash, north-east of Melbourne, marking the sixth death on country Victorian roads this weekend.

Police discovered the badly hurt man on Mansfield-Woods Point Road, about one kilometre out of Jamieson, just before 1.15 on Sunday morning.

Emergency crews tried to save him but he died at the scene.

Police believe he was struck by a vehicle, and Major Collision Investigation Unit detectives are now investigating.

The man has not been identified yet.

The incident marks a shocking weekend on Victoria’s roads, which had senior police urging motorists drive to the conditions, especially on country roads.

Five people were killed in two separate crashes on Saturday.

Two men, aged 36 and 19, and a woman, 18, were killed when their car left Colquhoun Road at Lakes Entrance in Victoria’s east and hit a tree, just after 2am.

In the second incident, a man and a woman died after their ute veered on to the wrong side of the Western Highway at Beaufort, in western Victoria, and hit a truck, around 9.30am.

“The death rate in the country is four-to-one of the metro area, so they’re simply more dangerous,” he said.

“Our country road network is far more expansive and we just need everyone to drive to the conditions. The posted speed is not the recommended. It’s the maximum.”