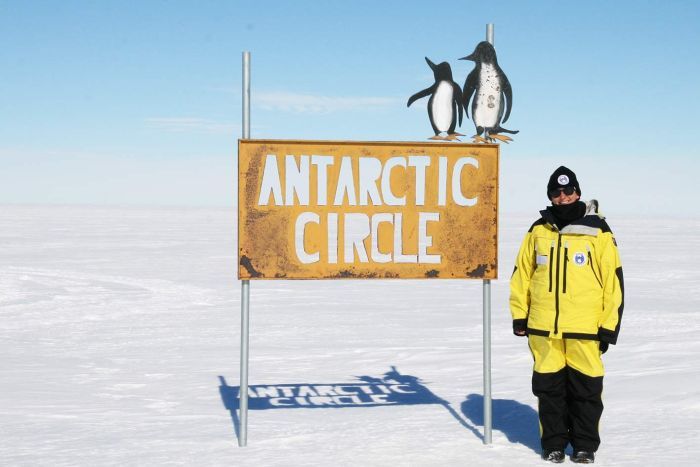 Growing up in Victoria’s ski fields, Rebecca Jeffcoat loved to read about the heroes of Antarctic exploration and dreamt of one day living on the frozen continent.

“I even named my first dog Mawson and I now have an Ernest,” she told ABC Radio.

Determined to one day make her dream a reality, Ms Jeffcoat studied meteorology and oceanology as a member of the Royal Australian Navy (RAN).

This month she travelled to Casey research station, just outside the Antarctic Circle, to begin a 12-month position as station leader.

Ms Jeffcoat first visited Antarctica while on secondment from the Navy.

“It was 1999 and I was part of a resupply voyage on Aurora Australis, weather forecasting in the southern ocean,” she said.”With the Navy, I was then on fisheries patrols around Heard Island and McDonald Islands.

“I just fell in love with the place even more.”

Almost 20 years later, Ms Jeffcoat is bracing herself for the challenge of a lifetime.

“As a meteorologist I could go for just the summer, but if I’m going to do it, I have to experience the whole year,” she said. “The winter is what it’s all about.”

Ms Jeffcoat has spent much of her naval career working in command and leadership roles and is currently the rank of Commander.

Most recently, as commanding officer of HMAS Kuttabul at Garden Island in Sydney, Ms Jeffcoat was responsible for keeping the port operation running.

“It’s a similar job at Casey, just a lot more isolated, less people and a bit colder,” she said.

‘Smallest things can be annoying’

“The remoteness and distance from family will be the greatest challenge,” she said.

“My husband is in the army and is in Iraq at the moment, I know what it’s like to be away from family, so I’ll be helping my expeditioners through it.

“If there’s a sickness in the family you can’t get home to visit them, for example.”

During the summer, around 150 expeditioners visit Casey and part of the job will be maintaining harmony within the small community.

“But through winter, there will be just 25 of us there for eight months,” Ms Jeffcoat said.

“Someone who eats with their mouth open, for example, and after five months you just can’t take it anymore.

“There are all those little things that just niggle when you’re in close quarters.”

Casey station is home to the Wilkins Aerodrome and has a 3.5 kilometre blue-ice runway.

“It’s up on the ice plateau and is graded and made smooth and ready for aircraft to land,” Ms Jeffcoat said.

The new leader said she expected to receive a warm welcome on arrival at the base.

“Most probably because of the fresh food that I’ll arrive with,” she joked.

“Fresh fruit and vegetables are prized commodities [and] over winter, a hydroponic shed provides some green leafy vegetables and tomatoes.

“The food has a big impact on the morale of the station.”