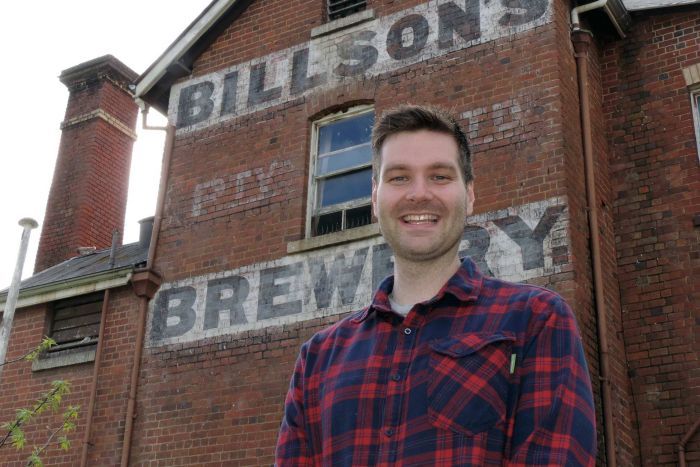 A historic brewery in Victoria that has not produced beer since the days of prohibition is getting a facelift by a man embarking on a tree change.

Billson’s Brewery in Beechworth, in the state’s north-east, has been bought by Nathan Cowan, 28, who moved to the town after quitting his marketing job in Melbourne.

“I was working too many hours, as some people fall into the trap of doing, and I think I realised that I was a bit of a country boy at heart,” he said.

Mr Cowan said he fell in love with the brewery the moment he first saw it, and is learning a lot during the process of returning the building to its original state.

But he said his friends and family thought he was crazy for taking on such a huge project.

“I know nothing about brewing beer, but plenty about drinking it,” he said.

“I know a little bit about the branding and marketing of beer and I’m starting to learn the manufacturing side of the business.”

Rich history from beer to cordial

Arthur Billson established the brewery on Last Street in Beechworth in 1865.

It is built above a natural spring, from which water is sourced for all the beverages produced on site.

“The brewery has all the right ingredients in terms of the spring water and some of the local ingredients, like the hops, that are available. So it’s really special,” Mr Cowan said.

But Billson’s has not operated as a brewery since Victoria’s short temperance prohibition in the 1920s.

Instead it produces about 16 flavours of cordial under the name Murray Breweries.

“I’d love to bring it back to life and make it true to the original vision,” Mr Cowan said. “It’s less my plan and more just reinstating the original plan. Pretty much use as many of the old ingredients, recipes and products that were used.”

When Mr Cowan bought the brewery, he inadvertently adopted a collection of historic horse-drawn carriages.

About 25 carriages dating back to the 19th century are housed in the boughs of the building.

“Many of the carriages are special to Beechworth and the goldfields region,” he said.

“There used to be lots of manufacturers of carriages in regional areas, and many regions had their own coach builder and maker.”

While the carriages are of little monetary value, Mr Green said they were culturally significant.

Back to the future for brewery

For the first time in a decade, Billson’s Brewery is open every day to the public.

Mr Green said its new custodian had breathed life into the building.

But there are plenty of challenges ahead for Mr Cowan before he returns Billson’s Brewery to its former glory.

The company’s rebrand will be complete within six months, and marketing and construction managers have recently joined the team.

Even the local community has come on board, putting in the hard yards at weekend working bees.

Mr Cowan said he also had plans to take advantage of the country views by starting a restaurant or bed and breakfast.

“Our biggest hurdle at the moment, other than the infestation of pigeons, is the machinery,” he said.

“The machine we make the cordial on was built in 1922 and takes six people to operate when it should need one.

“If we can get a machine that gives us flexibility to do different product lines, we’ll be full steam ahead.”