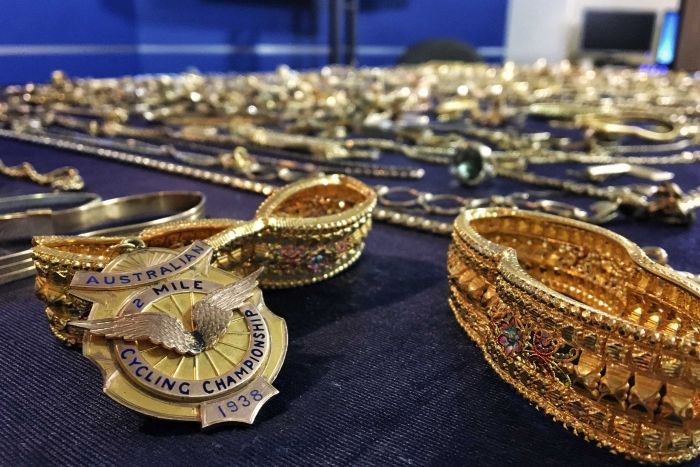 Police say the value of the recovered jewellery can not be measured in dollars and cents. Photo: ABC

Victoria Police are harnessing the power of social media to reunite hundreds of stolen pieces of jewellery with their rightful owners.

The pieces were seized in a raid on a Melbourne gold buying store in October, which had allegedly been receiving stolen jewellery taken during robberies on homes and businesses.

Three Colombian men were charged, and their matters are still going through the courts.

Police have uploaded close to 400 images of the rings, necklaces and other items, on to their Facebook page, hoping their owners will see them and come forward.

Detective Sergeant Ashley Penry said it is estimated the more than 600 items could be worth a quarter-of-a-million dollars.

But he said their real value could not be measured in dollars and cents.

“It’s more the sentimental value that Victoria Police have an interest in, in returning those to the victims,” he said.

“If they were to call up the contact number that’s located on Facebook, contact us directly, quote that reference number, and we’ll obviously make inquiries as to the legitimacy and hopefully get that item back to them.”

Police said they swooped on the business just before the items were melted down.

“So what we believe is that these items were going to be melted down in quite a quick time frame prior to us executing the search warrant,” he said.

A win after robbery on grand final day

Michelle Quadara’s house was robbed on AFL grand final day, while she was at the game.

She said it was upsetting to find her items gone, including a ring given to her by her grandmother.

“It was devastating … I thought I’m never going to get that back,” she said. “It was something I inherited from her and it was just devastating at the time.”

Police tracked her down through a pendant which was also stolen, but had her name engraved on it.

“I could not believe it, it’s just amazing.”