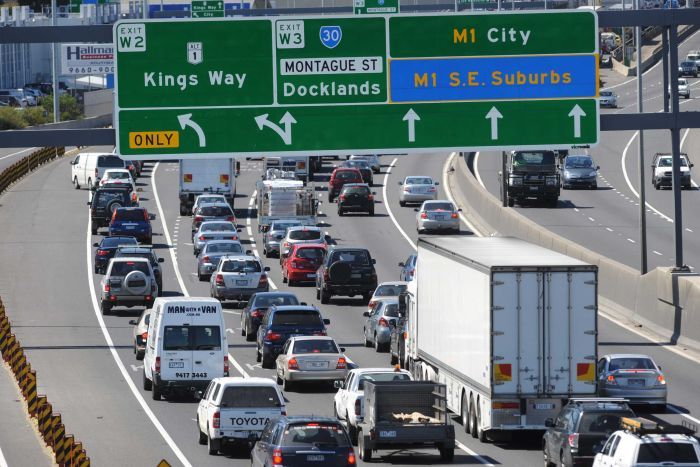 More than 74 per cent of Melburnians drive to work every day. Photo: AAP

Traffic lights would be removed from more than 50 congested road intersections with new underpasses created under a $5 billion pitch from Matthew Guy to voters concerned about congestion in Melbourne and Geelong.

Seizing on the popularity of level crossing removals, the Opposition is marking one year before the state election with the major infrastructure announcement, which would be partly funded by the sale of Snowy Hydro.

If elected, Mr Guy plans to create underpasses at dozens of major intersections to remove traffic lights. The policy would cost between $4.1 billion and $5.3 billion.

Census data shows 74 per cent of Melburnians drive to work every day.

Under the plan, 35 intersections would be removed with the preference for underpasses to be created rather than ugly road flyovers.

Mr Guy has pledged to consult with local communities, engineers and local government.

The 35 intersections are scattered throughout suburban Melbourne, with two also earmarked for removal in Geelong.

Twenty more sites would be identified if the Coalition wins government.

The Coalition estimates the project would create 5000 jobs during construction.

“These will be freeway style, clover interchanges,” Mr Guy said.

“Despite the level crossing removal program’s benefits to traffic along Melbourne’s train lines, over one million people continue to sit in gridlocked traffic on other parts of the road network.”

Mr Guy said reports showed the cost of congestion to the economy by the end of 2022 — after the next term of government — would be $7.24 billion.

The Opposition said the State Government would contribute up to $1.75 billion to the project with the same level of cash from the Commonwealth.

A further $1.8 billion would come from the sale of Victoria’s share of the Snowy Hydro scheme.

The Turnbull Government has flagged interest in buying Victoria’s slice.

‘You can’t build your way out of congestion’

Transport planning expert John Stone from the University of Melbourne warned the plan would only create traffic chaos by increasing congestion.

“They’re tapping into real concern but they know the evidence internationally, if they don’t they should know — you can’t build your way out of congestion,” Dr Stone said.

“I think it’s a very cynical way of exploiting people’s very real anxieties about congestion, because what they’re really doing is giving them more congestion by spending all this money, which is then not available for public transport, schools and hospitals.”

He doubted the project could be delivered without buying up property, and said underpasses would create trenches outside homes and businesses.

“It also means people like tradies, couriers and salespeople who use the roads to get between jobs will be able to do so more quickly. That’s good for business and good for jobs.”

Mr Guy said it would probably not be necessary to acquire properties or land because the “existing footprints” of the intersections could be used.

He said he was confident the underpasses would not reduce turning options.

He said the Coalition sought independent advice when drawing up the plan.

“We’ve had these costs independently assessed to ensure they are absolutely correct,” Mr Guy said.

The Coalition is set to spend big on roads in its pitch to Victorians in 2018, with Mr Guy already committing to revive the East West Link as well as build the North East Link which Labor has already began preliminary work on.

The Andrews Government’s level crossing removals have proven popular and its infrastructure agenda will also be a key part of its platform to retain office at next year’s election.