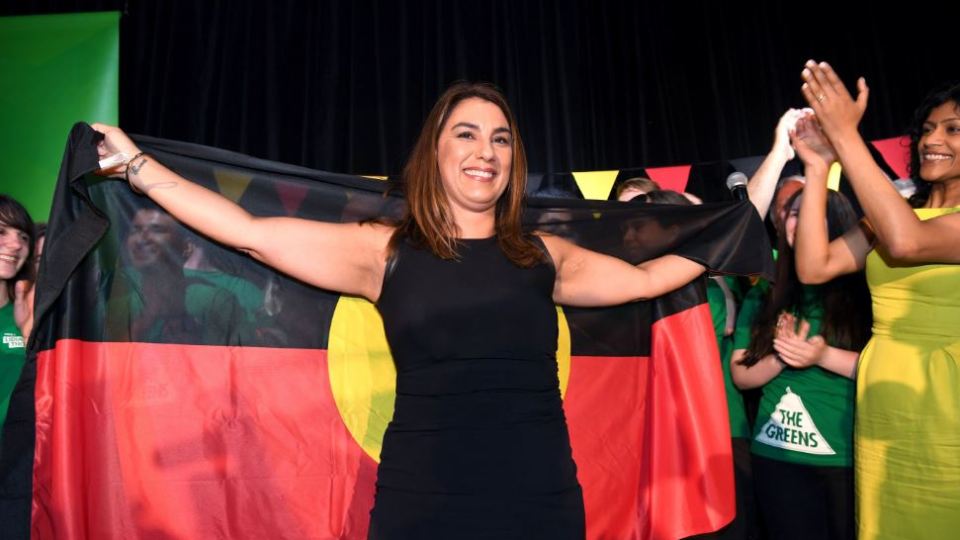 The Greens' Lidia Thorpe celebrates after ousting Labor from the seat of Northcote. AAP

The Victorian Greens are planning an aggressive campaign to gain more seats at the 2018 state election after victory in Saturday’s Northcote by-election.

And the Victorian Liberal party is hoping to capitalise on Labor’s woes, with leader Matthew Guy backing state director Nick Demiris, who said the party may not run candidates in traditionally left-leaning, inner-city Melbourne seats.

“Let me be very clear, the Liberal Party is no longer a preference machine for the Labor party in inner city seats,” Mr Guy said.

“We’re not there to roll up and get these people elected.”

Greens candidate Lidia Thorpe won more than 45 per cent of the primary vote to end Labor’s 90-year strong-hold of the electorate, and become the first Aboriginal woman to hold a seat in Victoria’s Parliament.

The Greens now have three seats in the Victorian Lower House and five in the Upper House.

A Greens win in Northcote was not a surprise, but the way voters flocked to the party in the once-safe Labor seat has shocked many.

Victorian Greens leader Samantha Ratnam said with an extra member in Parliament, the party was well placed to push its progressive policy agenda.

“This campaign has created huge momentum for our 2018 state election campaign,” she said.

We’ll be campaigning to win the seats of Brunswick and Richmond, retaining the seats of Melbourne, Prahran and Northcote and retaining all our Upper House representation.”

Ms Ratnam said the Greens would continue to campaign strongly for the creation of a Great Forest National Park in the state’s central highlands, as well as more investment in public transport and improvements to public housing ahead of next year’s poll.

The Liberals did not run a candidate in the by-election.

Police Minister Lisa Neville said the Government was putting the loss behind it.

“It is obviously extremely disappointing that we didn’t win the seat of Northcote,” she said.

“What is absolutely critical going forward over the next 12 months is that we need to continue getting on with the job in terms of delivering … things that matter to communities.”

Mr Demiris announced the Liberal’s intention to not stand in some inner city seats during a speech at the Victorian Liberal State Council on Saturday.

In past polls, Liberal preferences have been crucial for the Labor Party in securing inner-city seats over the Greens.

Mr Demiris said his party needed to re-think its political strategy, and “get tougher on preferences”.

“I have an idea that might not be popular across all quarters of the party,” Mr Demiris told a room of party faithful.

“Here is my message to Labor: The Liberal Party will consider whether or not we run in all inner-Melbourne seats in the coming state election.

“Our position might be that we tell the Labor Party that if they don’t preference us above the Greens, in Higgins, in Prahran, then game-on in their inner seats with the Greens,” he said.

Victoria is set to go to an election in November 2018, and it is understood a decision on whether to go ahead with the move will be decided by the Victorian Liberals in the months before the poll.

Mr Demiris said not standing in Northcote showed the “ferocity” Labor had to employ to fend off the Greens.

“A lot of people have asked me why we didn’t run,” Mr Demiris said.

“Well, if we had run in Northcote, we would have expended resources, funds, had a candidate, a campaign team on the ground.”