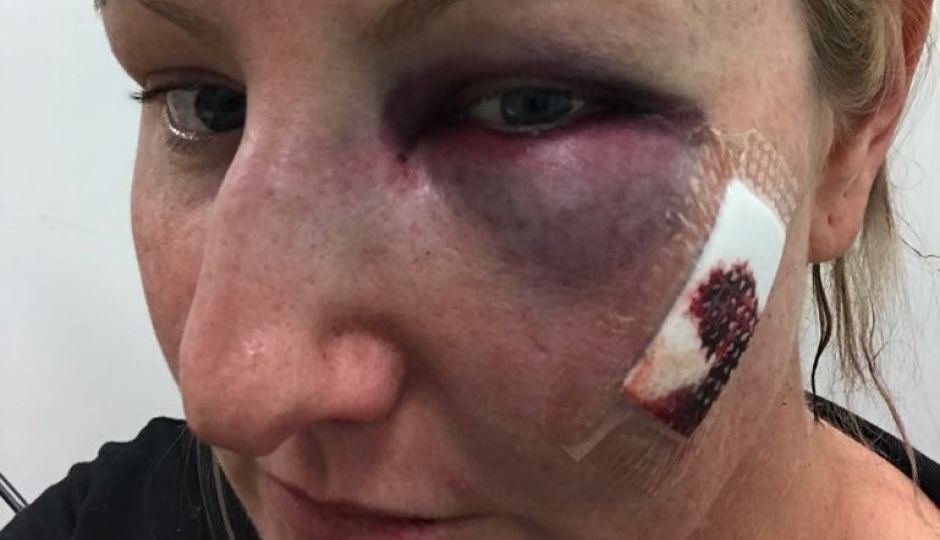 Samantha Mitchell says she was punched by an off-duty police officer when she was trying to get help. Supplied

Victoria Police has been criticised over its handling of an investigation into a Ballarat sergeant who has admitted to punching his neighbour on the footpath.

It was just after midnight when Samantha Mitchell knocked loudly on her neighbour’s front door on a quiet street in suburban Ballarat, desperate for help.

“I was crying quite hysterically, I was very upset, very scared,” the 32-year-old former real estate agent said.

A dispute with her partner had escalated, and she had been forced out of the house while her children lay sleeping.

“And then I heard a loud male voice tell me to ‘f––– off, which really startled me,” she said. “I didn’t expect that response at all, so I ran onto the street.”

The neighbour was off-duty police Sergeant David Berry, a long-serving member of the police force in Ballarat.

In a statement to police, Sergeant Berry has admitted he chased Ms Mitchell as she ran from his property after he was awoken “by the sound of a loud bang”.

He told police he then hit Ms Mitchell in self-defence.

“I immediately threw a single punch with my right hand, fearing she was about to hit me and not knowing if she was holding anything,” Mr Berry said.

“I was fearful of being assaulted myself.”

Ms Mitchell — a former police officer from Queensland — reported the assault the following day at the Ballarat police station. But before she could make a statement, a constable approached her and served her with an intervention order.

It listed Mr Berry as the one needing protection, due to “ongoing issues” with his neighbour.

“Police hold fears for [Sgt Berry] as there have been numerous ongoing issues with [Ms Mitchell] confronting [Sgt Berry] and his wife when alcohol affected,” said the order.

“I hadn’t slept, my nose was still on the other side of my face, I had bruising, swelling, my eye was all bloodshot from the impact of the punch, I felt like I was going to be sick at any minute,” she said.

“I’d been assaulted … and I suddenly was being treated like a perpetrator.”

Six months on, the sergeant has not been charged over the assault.
Jon Irwin, a Ballarat-based criminal lawyer, has taken on Ms Mitchell’s case.

“I don’t doubt being a police officer’s a very, very difficult job at times, but it doesn’t give you carte blanche to take the law into your own hands and belt people,” Mr Irwin said.

“You’ve got to ask yourself why is it that the police officer involved isn’t being charged with unlawful assault or recklessly [causing] injury or one of those sorts of charges, that for the sake of the argument I would be charged with if I belted someone in the street.

“It does make the case for an independent body to be put in place to carry out these investigations.”

“It takes far too long, it’s highly inadequate and it means Victorians don’t have access to basic justice.”

The legal practice takes complaints about police misconduct allegations from all over Victoria, and provides support to victims through the formal complaints process.

It’s when police overuse that power, or use excessive or inappropriate levels of force that it becomes unlawful and problematic.”</p> <p>

Mr Kelly said the state’s Independent Broad-Based Anti-Corruption Commission (IBAC) refers the majority of complaints it receives back to police.

“IBAC don’t have the resources or the capacity or the training to adequately and promptly investigate complaints against police,” he said.

“IBAC do reports, and they do overviews and they do audits, all of which are valuable and useful to improve systems.

“But until we have an investigative capability that is civilian [and] practically, hierarchically, institutionally independent from police, then the problems will continue.”
Police capable of investigating themselves, union says

Criminal cases are being prosecuted against police officers over misconduct allegations.

Almost 30 officers are currently facing charges for criminal misconduct, including two Ballarat members charged with assaulting a woman in police cells in 2015.

But there are other complaints that never see the light of day.

Steve Jackson said he was assaulted by police two years ago, after he refused to produce identification outside a Ballarat night club.

“I was hit three times, and I woke up in handcuffs on the road, with blood pouring from my face,” he said.

An incident summary from police states that Mr Jackson was staring “intently” at them.

“I don’t know what I’ve done to even make them get out of their car to approach me,” Mr Jackson said.

Police have since dropped all charges against Mr Jackson.

Mr Jackson received a letter from IBAC declining to pursue his case — but it never listed the reasons why.

“It creates a lot of fear knowing that police are acting like this and not being held accountable for their actions,” he said.

IBAC was contacted by the ABC but declined to comment for “legal and operational” reasons.

It said Ms Mitchell’s matter was still under investigation.

The Victorian Parliament is investigating the way the state handles complaints against police with an inquiry into the oversight of police misconduct.

In its submission, the Police Association said it was opposed to any expansion of IBAC’s oversight powers.

The union is “unconvinced that the present system is failing”, and wants some of IBAC’s powers reviewed, if not removed.

Ms Mitchell thinks otherwise. “It doesn’t matter about the law, I just feel like police win,” she said.

In a statement, Victoria Police said it was “changing the way it handle[s] complaints”, with a focus “on ensuring we take swift action where needed”.

“We do not believe that these issues are widespread across the force,” the statement said.

The inquiry is due to hand down its report in 2018.