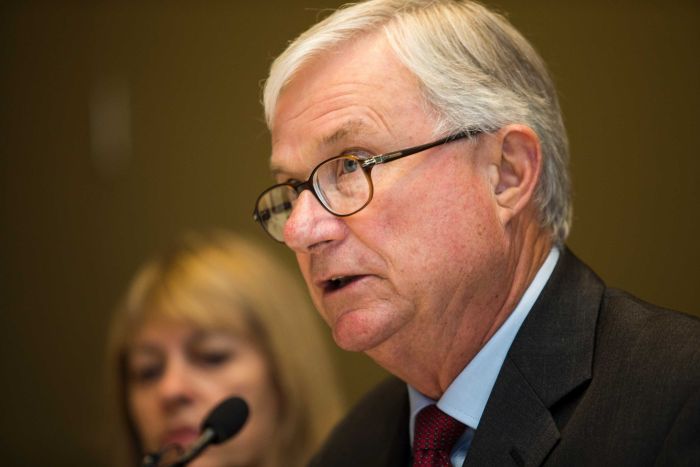 Police forces failed in their duty to protect Australian children because they often refused to believe their complaints about sexual abuse, the royal commission’s chairman says.

Child protection agencies also failed to listen to children, leaving them in situations of danger, Justice Peter McClellan said in some of his final remarks before the commission’s final sitting.

The chairman of the Royal Commission into Institutional Responses to Child Sexual Abuse gave a speech in Melbourne this afternoon, critical of Australia’s major social institutions for seriously failing to protect children from paedophiles.

“It is not a case of a few ‘rotten apples’,” he said. “The problems have been so widespread, and the nature of the abuse so heinous, that it is difficult to comprehend.

“Across many decades many institutions failed our children. Our child protection, criminal and civil justice systems let them down.

“We now know that tens of thousands of children have been sexually abused in many Australian institutions. We will never know the true number.

“Whatever the number, it is a national tragedy, perpetrated over generations within many of our most trusted institutions.”

Justice McClellan gave the speech at Swinburne University, reflecting on the systemic nature of the abuse and institutional cover-ups.

“No doubt many Australians were aware of some of the problems. ‘Altar boy’ stories were around when I was a schoolboy in the 1950s and 1960s,” Justice McClellan said.

In what may indicate the direction of December’s final royal commission report, Justice McClellan noted the failure of institutions and their attempts to stymie the course of justice.

“Many institutions we examined did not have a culture where the best interests of children were the priority,” he said.

“Some leaders felt their primary responsibility was to protect the institution’s reputation, and the accused person.

“Police often refused to believe children. They refused to investigate their complaints of abuse.

“Many children who had attempted to escape abuse were returned to unsafe institutions by police.”

None of the cases examined in public hearings focused entirely on police behaviour.

But evidence of investigative failures included the shocking case of Victorian detective Denis Ryan, who tried in vain to charge paedophile priest Monsignor John Day in 1972.

He said the justice system had created many barriers to prosecutions and civil claims, and investigation processes were inadequate.

Often, justice was made impossible by institutions that engaged “the aggressive hand of the lawyer”, he said.

Justice McClellan drew particular attention the Roman Catholic Church, which had the highest number of alleged perpetrators and abused children.

“Alleged perpetrators were often allowed to have access to children even when religious leaders knew they posed a danger,” he said.

“Alleged perpetrators were often transferred to another location where they had access to children but were never reported to police.”

Since the inquiry was called by then-prime minister Julia Gillard five years ago, the royal commission has been contacted by more than 15,000 survivors or their families.

It has held 57 public hearings, sat for 444 days and taken evidence from 1300 witnesses.

“When the Australian governments created the child abuse royal commission, they defined a task of a breadth and complexity faced by few royal commissions,” Justice McClellan said.

“It is impossible not to share the anger many survivors have felt when we understand that they were so deeply betrayed by the people they were entitled to trust.”

The commission’s final report will be delivered to Australia’s Governor-General on December 15.

Dr Vivienne Waller is a lawyer who represents dozens of alleged victims of sexual abuse, many of whom have participated in the royal commission.

“Those of us who have been working with and looking after survivors for the last 25 years know that survivors will be vindicated by this,” she told the ABC.

“Our clients have been very grateful for the research and the forensic investigation of the commission, which has basically validated what we’ve all known in our heart of hearts for a very long time.

“The Catholic Church has presided over the systemic and widespread sexual abuse of children.”