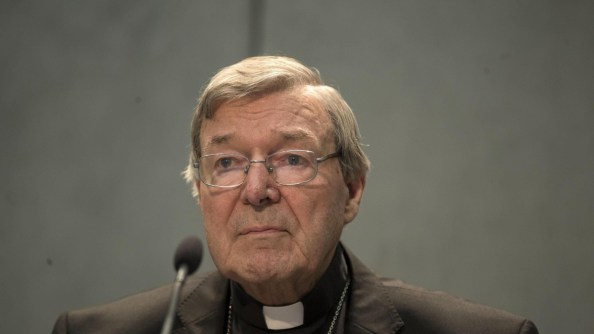 George Pell was greeted by a huge media scrum and heavy police protection for Wednesday's hearing at the Melbourne Magistrates Court. Photo: Getty

Police may escort Cardinal George Pell through an underground entrance for his next Melbourne court appearance after officers had to force their way through a 100-strong media throng.

The highest-ranking Catholic official to be charged with sexual abuse appeared in court for the first time on Wednesday, with his barrister making it clear Pell will plead not guilty to all charges.

Police officers shepherded Pell through a crush of local and international journalists, photographers and camera operators through the main entrance to the Melbourne Magistrates Court and at one stage blocked off part of the road immediately outside the building.

The third most senior Vatican official’s case is due back in the same court on October 6. Victoria Police Chief Commissioner Graham Ashton said police would consider taking Pell through an underground door to the court complex next time.

“There’s a couple of different options that we’ll look at, certainly won’t rule that out,” Mr Ashton told 3AW on Thursday.

“One of the issues going underneath through the roller doors is you’ve got a lot of prisoners down there. We’ve got to get those prisoners up to court.

“There are other ways it could be done. We’ll just have to do that in consultation with the courts.”

About a dozen police officers helped Pell through the media throng as he arrived at court on Wednesday morning.

About 20 forged a path for him to walk the 100 metres back to his barrister’s office after his appearance.

Mr Ashton says police had prepared for a large media turnout on the day, with a number of news organisations flying in from interstate and overseas.

Wednesday’s filing hearing, the first step in the preliminary court process, was over in six-and-a-half minutes.

Magistrate Duncan Reynolds adjourned the case until a committal mention on October 6, when a date may be set for a committal hearing to determine if Pell stands trial.

The prosecution has until September 8 to hand over its brief of evidence to the defence, although prosecutor Andrew Tinney SC said that could occur as soon as next week.

Pell will not have to enter a formal plea unless a magistrate decides there is enough evidence for him to stand trial in the County Court.

“For the avoidance of doubt and because of the interest, might I indicate that Cardinal Pell will plead not guilty to all the charges and will maintain his presumed innocence that he has,” Mr Richter told the court.

The former Sydney and Melbourne archbishop and Ballarat priest has taken leave from his position as Vatican treasurer to return to Australia to defend himself.

Police may smuggle Cardinal George Pell into next court appearance