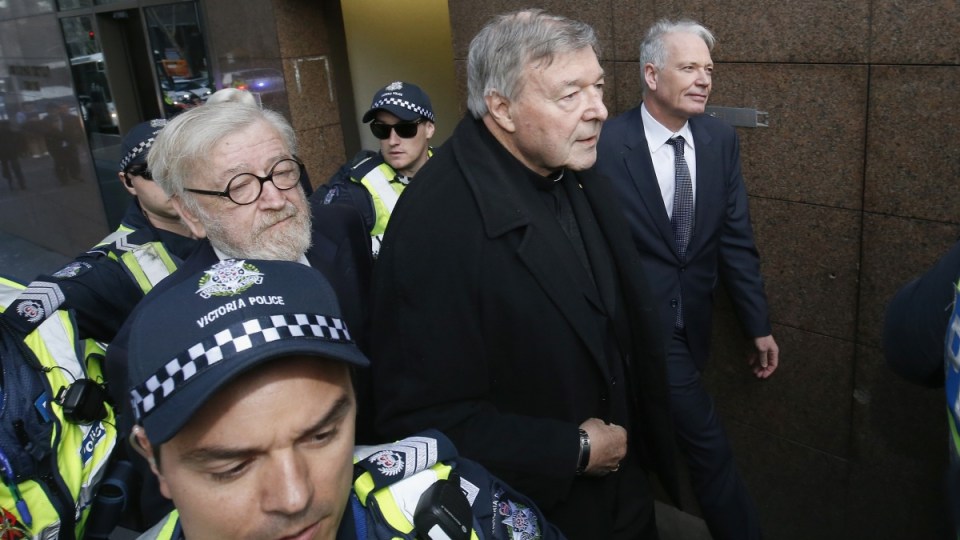 Cardinal George Pell has pleaded not guilty to historical sexual offence charges in a Melbourne Magistrates Court hearing that lasted just six minutes, during which he did not speak.

Cardinal Pell was escorted by police and surrounded by a massive scrum of local and international media as he entered the court building for his first hearing since being charged by Victoria Police late last month.

Details of the allegations of sexual assault, which involve multiple complainants, have not been made public.

Cardinal Pell, Australia’s highest-ranking Catholic and thought to be the third most influential man in the Vatican, will return to court on October 6.

The crowd gathered outside the court greeted Cardinal Pell with a smattering of applause as he was taken through security with his legal team – including top criminal barrister Robert Richter QC – for the 10am hearing.

Mr Richter told the court his client did not have to enter a plea at this stage, but maintained his innocence.

“For the avoidance of doubt and because of the interest, might I indicate that Cardinal Pell pleads not guilty to all charges and will maintain his presumed innocence that he has,” he said.

Prosecutor Andrew Tinney SC made a brief statement at the beginning of the hearing to warn media that the sub judice period for reporting had started.

“All reports should be limited to fair and accurate reports of the proceeding,” he said.

Mr Tinney said the Director of Public Prosecutions had already had to write to some media organisations that it suspected had breached the rules.

The prosecution’s brief of evidence will be served by September 8 to Pell’s legal team, which did not ask the magistrate to excuse the Cardinal from appearing when the case returns to court.

A police escort was needed to help Cardinal Pell navigate the waiting media outside after the hearing.

“Not unsurprisingly, there’s been a great deal of media and other interest in these matters,” Mr Tinney said.

As Cardinal Pell walked from the court room, some of his supporters yelled: “God bless you Cardinal.”

Police closed off a lane on Williams Street outside the court to make room for journalists and camera crews, some of whom arrived around 5am to secure a place in the court room.

Several protesters were also on the steps outside court ahead of Cardinal Pell’s arrival.

The cardinal was granted leave by the Pope to return to Australia from the Vatican for his first appearance in court.

The court has said he would not receive any special treatment.

When Cardinal Pell next appears in court for a October committal mention, lawyers from both sides will have the opportunity to canvass legal issues before a committal hearing date is fixed.

Cardinal Pell will not have to enter a plea unless a magistrate decides there is enough evidence to stand trial in the County Court.

“It’s only if the accused is committed to trial that he will be called upon to enter a formal plea,” Mr Reynolds said.

In the hours after he was charged by Victoria Police on June 29, Cardinal Pell told reporters he had been the victim of “relentless character assassination” and the charges “strengthened his resolve” to clear his name.

“I’m looking forward, finally, to having my day in court,” he said at the time.

“I’m innocent of those charges. They are false. The whole idea of sexual abuse is abhorrent to me.”