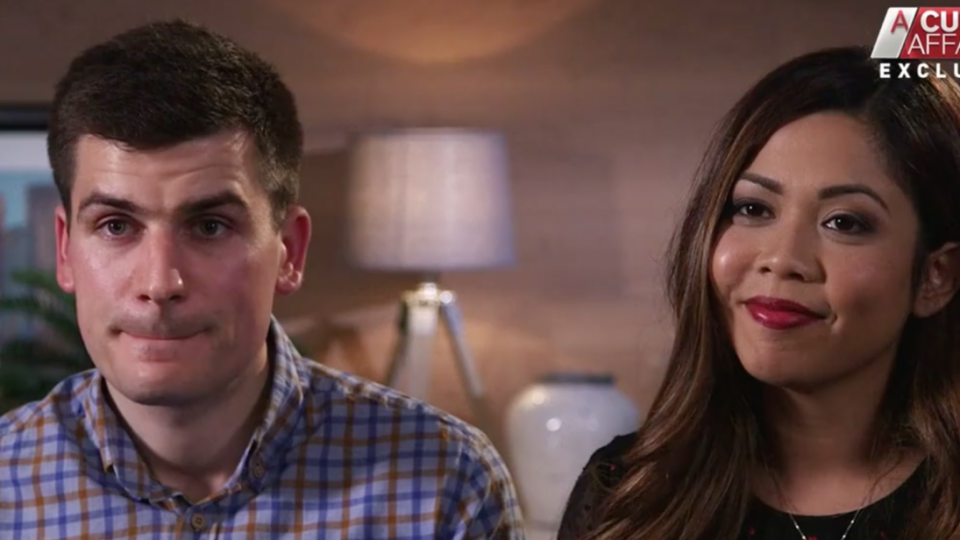 Matthew and Nawwar Bryant open up for the first time about the Bourke St rampage tragedy. Photo: Channel Nine

A father has recalled the moment he was told his three-month-old son was dead after being mown down by a car while asleep in his pram in Melbourne’s Bourke Street in January.

“It was surreal. That morning I was playing with him and then you are told he is clinically brain dead,” Matthew Bryant told A Current Affair‘s Martin King on Monday night.

Mr Bryant’s wife, Nawwar, recalls that little Zac was the love of their lives.

“He was absolutely perfect. From the moment we knew we were going to have him until the day we laid him to rest, he was perfect,” she said.

For the first time, survivors of the Bourke Street incident have spoken about the tragedy of that horrific day, and it was harrowing viewing.

Mohan Kumar and his wife Nethra both worked in the same building in Bourke Street and had met for a coffee soon after Nethra had breastfed their son Harry in crèche.

“She (Nethra) must have run backwards on the footpath but I don’t know. I forgot where I was. I forgot I was with my wife,” he said.

“When I realised my wife was with me, I started looking for her and when I came back, she was lying there.”

Mrs Kumar had taken the full impact of the car and suffered injuries to every part of her body.

“She had her eyes open, not blinking. I thought I have lost her and I started screaming. It was involuntary,” Mr Kumar said.

In the midst of the carnage, which saw six people killed and scores injured, there was a tale of extraordinary survival.

Baby Zac’s sister Zara, according to her parents, was thrown 150 metres along the road after she, too, was hit while asleep in her pram.

She suffered two fractures – one in her neck and another in the spine, facial abrasions, burns and bruising on her brain.

“It’s a miracle,” Mr Bryant said. “She’s a total miracle and I can’t even describe how amazing it is to us.

“In the scheme of things she came out unscathed.”

Miraculously too, Nethra Kumar survived her shocking injuries and recently left hospital – although she is still in rehab care.

Mr Kumar still struggles with the after-effects of the tragedy and has not been able to return to work in Bourke Street.

Aside from the obvious grief and pain, the extraordinary message that emerged from their stories was the powerful love they all feel for Melbourne and its people.

Mr Kumar said of those who helped his wife in the aftermath: “You guys are the heroes. I can never forget your help in my life. And people still make Melbourne the most loveable city in the world.”

The Bryants drew strength from the wall of floral tributes left for those who died in Bourke Street.

“I was reading all those messages about Zac and there were people paying their tributes, extending their condolences,” Mr Bryant said.

“Some of the things they wrote were uplifting.”

Mrs Bryant was not surprised by the response.

“That’s what Melbourne is like,” she said. “We rally in times of tragedy.”

Dimitrious “Jimmy” Gargasoulas, 27, has been charged with the murders of Zac Bryant, Thalia Hakin, 10, Jess Murdie, 22, Matthew Si, 22 and a 25-year-old Japanese national.

He is expected to be charged also with the murder of Bhavita Patel, 33.

His case is listed for a mention in the Melbourne Magistrate’s Court on August 1.