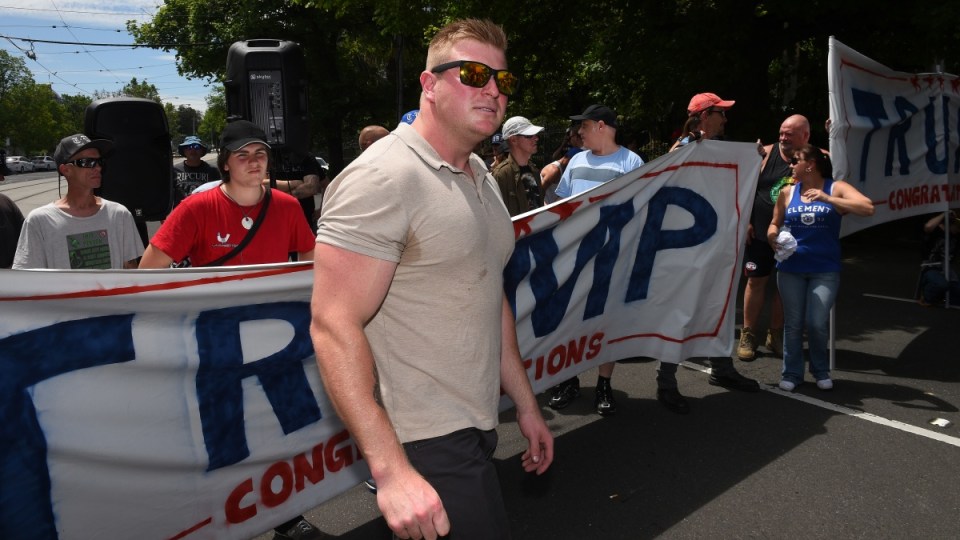 About 50 anti-discrimination activists have staged a protest outside the Melbourne Magistrates’ Court as three members of an anti-Islam group appeared on religious vilification charges.

Blair Cottrell, Christopher Shortis and Neil Erikson of the United Patriots Front (UPF) group have been charged with religious vilification and behaving in an offensive manner in public.

The charges relate to a mock beheading staged during protests against a Bendigo mosque in 2015.

Police surrounded the co-accused as they left the court to prevent contact with the protesters.

Outside the court, Shortis said beheading the effigy was an example of free speech.

“We will fight those charges vigorously and, not only that, lawfully,” he said.

“It was a dramatic, dramatised political statement showing the very practices that exist in Islamic countries today.
“Am I saying every Muslim is capable of this thing? No. I’m merely attacking the theology of Islam.”

Police holding the line outside Melbourne Magistrates Court where anti-facist protesters are rallying ahead of UPF leader appearance pic.twitter.com/mOWXqHicFi

Double the number of police to protesters at an anti-fascism rally at Melb magistrates court. UPF leader in court. pic.twitter.com/1zmwh71VUE

Debbie Brennan from the Campaign against Racism and Fascism group said the mock beheading was an extremely racist stunt.

“That speech is not tolerable,” she said.

The matter has been adjourned until May.